What industry hires veterans at a rate 50% higher than the national average, boasts the fastest growing job category in the nation, and is expanding in Michigan? If you guessed wind energy, you’re right. Like everywhere else, Michigan’s energy mix is changing due to improvements in technology, evolving market conditions, and energy policies that lead the way forward, taking advantage of opportunities. The modern electric grid has served us well, but like other infrastructure in the country, it can be improved with new technologies – advanced energy technologies. Last year, Michigan was considering giving up on advanced energy, but instead doubled down, increasing its renewable portfolio standard from 10% to 15% and extending its energy efficiency standard through 2021. Now, fair winds are blowing – and Michigan is reaping the benefits.

Since 2008, the price of wind has fallen 61%.  The two wind contracts approved by the Michigan Public Service Commission most recently were at or below $45 per MWh. Even without the federal Production Tax Credit (PTC), wind is approximately equal to natural gas in price, and cheaper than coal or nuclear. For Michigan, building the lowest cost generation source makes sense, especially when that resource is also secure and clean.

This is not just a Michigan phenomenon. Across the nation, wind has put downward pressure on costs because it is a fuel-free energy source. Risk decreases significantly when you don’t have to worry about fuel prices going up in the future. In addition to being the lowest-cost generation source, helping to keep rates in check, wind offers additional benefits to Michigan communities: 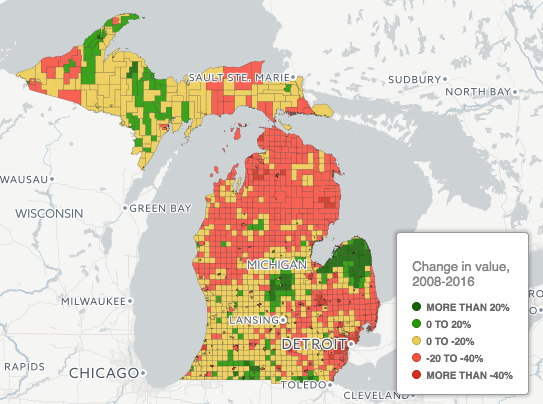 Research done at the University of Michigan shows that farmers who have turbines on their land invest twice as much money in their farms and are more likely to have a succession plan in place to keep their farms going.

Moreover, large energy consumers in Michigan are demanding renewable energy. As of 2016, 71 of the Fortune 100 companies had adopted sustainability goals that lead them to seek out renewables to power their operations. To avoid volatile fuel prices, decrease committed costs, and improve sustainability, companies like General Motors, Steelcase, and Walmart are making commitments to get their electricity from renewable sources.

General Motors told a gathering in November 2016 that the company saved $5 million in 2015 by purchasing renewables. And as part of a $5 billion investment outside Grand Rapids, data center company Switch asked for two things: that Michigan be competitive in terms of business tax burden, and that the company be able to meet 100% of their energy needs with renewable energy. And Amazon - who plans to meet a 50% renewable interim goal by the end of 2017 - just announced the second of two fulfilment centers in Michigan.

Cities are also coming together to request more renewables. In April, the city of Chicago announced that it will power all city buildings with 100% renewable energy by 2025. Michigan cities are also leaders in this regard – the city of Grand Rapids has long been out in front on sustainability issues, with a 100% renewable goal by 2025, and Traverse City plans to get there by 2020. But the interest in renewable energy is not limited to large population centers – Northport, Mich., announced its 100% renewable goal two years ago, when it was one of only 20 communities across the country to do so.

When you hear people say that renewable energy can’t meet our energy needs, ask what they know that leading companies like Google and General Motors, and cities like Chicago, Grand Rapids, and Traverse City don’t? And what about reliability? A number of states have successfully integrated significant amounts of wind onto the grid without any negative impact. Improvements in forecasting allow for more and more wind farms to feed into the grid. Many states, including Texas, Oklahoma, Kansas, and Minnesota are incorporating wind resources representing 20% or more of the total electricity production.

Wind is on the move in Michigan, along with other advanced energy technologies and services. That’s good news for the advanced energy industry – and for the Michigan economy.