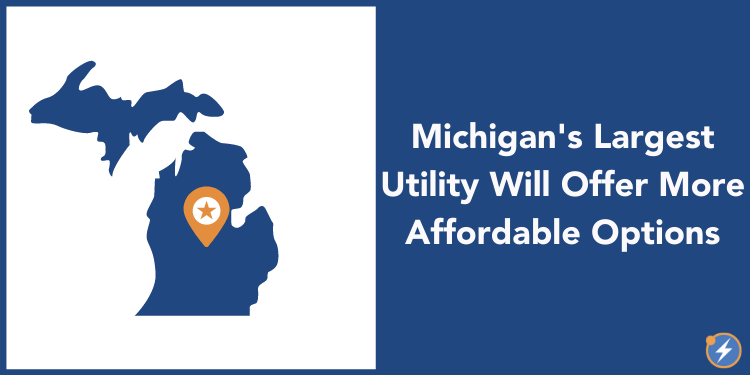 This post originally appeared in the Michigan EIBC blog.

This year has seen some of the most significant moves yet to realize cleaner energy in Michigan. Now, customers of Michigan’s largest utility, DTE Energy, will find it easier to “go green” due to a settlement between DTE and groups including the Michigan Energy Innovation Business Council (Michigan EIBC) and Advanced Energy Economy (AEE). The settlement improves DTE’s voluntary green pricing program — in which companies from GM to the Detroit Zoo, as well as residential customers, can subscribe directly to wind and solar projects — by making it more affordable and more competitive.

First, a little background: these voluntary purchasing programs are fairly new, but throughout their short history Michigan EIBC and AEE have pushed the utilities to make them more ambitious. One of the biggest problems we have confronted is that, initially, the costs of renewable energy through these programs was too high — well above the market price for renewable energy around the country, which has been continually falling due to competition and technological improvements. While large utilities like DTE and Consumers Energy had renewable energy options on the books, they were costly and not well matched to customer needs and preferences, especially for large commercial and industrial customers.

In 2018, in response to criticisms from Michigan EIBC, AEE and other groups, DTE added a new green pricing plan for commercial & industrial customers to make the prices more reasonable. Following that change, participation notably increased, with customers like the Detroit Zoo, GM, and the University of Michigan signing up to buy renewable energy.

Given that success, in 2020 DTE asked state regulators to graduate the program for large customers from a pilot to an official part of its MIGreenPower program, in which any customer can sign up for renewable energy. As a result of the recently approved settlement, DTE’s green pricing offerings will be improved in several ways:

Even after this settlement, there is room for improvement. The renewable projects should be split in ownership between the utility and third-party developers, ensuring that sole ownership by the utility does not artificially drive up costs. The community solar program could be much more expansive, involve more communities and third-parties, and be more affordable. For large customers, there should be opportunities to pay rates based on the competitive market price of renewable energy. While outside the scope of the green pricing program, the biggest change that would make renewable energy more accessible is to lift Michigan’s cap on distributed generation so rooftop solar can continue to be spread without an arbitrary limit.

Michigan EIBC and AEE will continue to push for these potential advancements in coming updates to the program. But for now, DTE customers can enjoy better and more affordable options for supporting renewable energy.

To learn more about ways to improve customer access to renewable energy through utilities, download the report below.