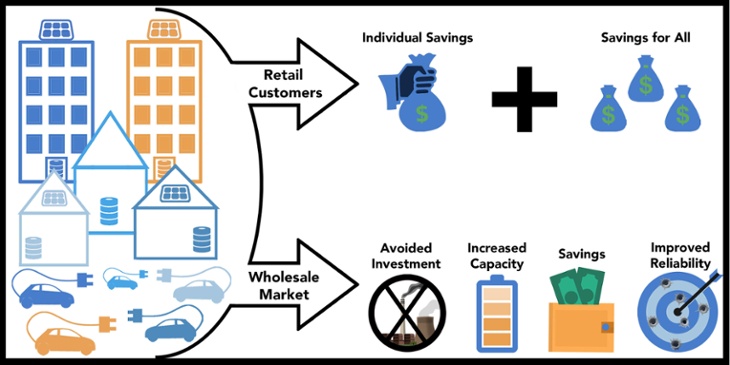 Before we dive into the case studies, let’s take a step back and explain why all this matters. In one word: benefits – to DER owner/hosts, to electricity customers, to the electric grid, and even to utilities and grid operators. These benefits come from getting more use out of resources that would otherwise be limited to meeting onsite needs (such as demand charge reduction and increased resilience) and distribution system benefits (such as peak demand shaving). Given that many DERs are also capable of providing services that have real value in wholesale markets, including energy, capacity, and ancillary services such as frequency regulation, voltage support, and reactive power, it only makes sense to make them eligible to compete for providing those services. Doing so gives DER developers and hosts/owners an additional revenue stream (thus lowering costs), saves money for all electricity customers through better utilization of existing assets, and increases visibility and control for grid operators.

So, where is this DER magic happening? Let’s take a look, via AEE’s new white paper, Putting Distributed Energy Resources to Work in Wholesale Electricity Markets.

The report’s first case study looks at Stem Inc.’s aggregated distributed energy storage facilities. which are bid into the California ISO (CAISO) market through the Proxy Demand Response (PDR) mechanism. These storage resources are dynamically managed to serve as demand response assets when needed by CAISO while also providing valuable services to their host customers, including demand charge reduction. PDR is currently the best way for storage assets to participate in the CAISO market despite limiting storage to providing load curtailment.

Second is a portfolio of energy storage plus distributed solar across 13 buildings owned by Glenwood Management in New York City, installed and operated by Enel X and participating in both ConEdison’s retail demand response program and the New York ISO (NYISO) Special Resource Case (SRC) program. At the same time, these assets protect residents against brownouts and other grid disturbances and insulate Glenwood from costly demand charges.

Third, the paper explains the recent successful distributed solar-plus-storage bid by SunRun into the ISO New England (ISO-NE) forward capacity market – the first aggregated distributed solar-plus-storage portfolio to clear a capacity market in any RTO/ISO. SunRun formed a partnership with National Grid to inform its bid and ensure that it met the rigorous requirements to participate in the forward capacity auction.

The final case study explores a missed opportunity for a microgrid owned by Co-op City in the Bronx to add additional DERs and participate in NYISO’s market. Current treatment of standby charges and infrastructure upgrades by the distribution utility does not account for wholesale market participation, and makes participation cost-prohibitive despite the potential benefits.

Until there are clear, fair participation rules in all markets to ensure that DERs are able to provide all the services they are technically capable of providing, it will remain an uphill battle for DERs to bid into wholesale markets. Which means that until FERC acts, consumers will continue to pay for costly new resources to deliver energy, capacity, and ancillary services while DERs sit on the sidelines, available and technically capable yet unable to even compete. With clear rules in place, case studies like the ones above will proliferate, new business models and technology improvements will emerge, and consumers will reap the benefits of a more resilient, more competitive electric grid.