Guide to Making Cities Resilient in Energy, Water, and Waste 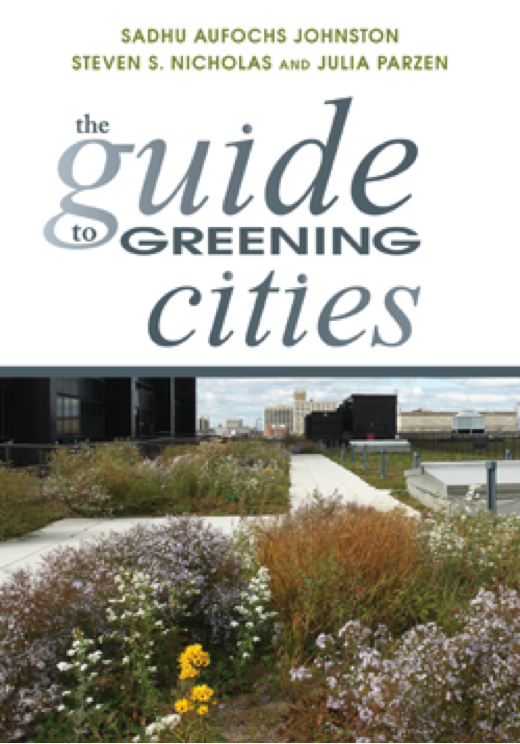 Municipalities are key markets for advanced energy technologies, products, and services. With concentrations of buildings, vehicles, and infrastructure, cities are the proving grounds for new ways to manage energy, water, and waste. This guest post is excerpted from the conclusion of “The Guide to Greening Cities.” The authors are members of the Urban Sustainability Directors Network, and their new book chronicles efforts by city governments in the United States and Canada to make their communities not only more environmentally responsible but more resilient. Published by Island Press, the book is on sale at 50 percent off this week only, through October 28.

Fifteen years ago, only a handful of cities — such as Chicago, New York, Minneapolis, Seattle, and Portland, Oregon — had environmental or sustainability directors on staff. Today, several hundred cities, including communities such as Fayetteville, Arkansas, and Charlotte, North Carolina, have hired staff to work on sustainability, and most sit in influential, senior-level positions, reporting directly to mayors, city managers, or directors of key departments. A quiet but robust revolution is very much in progress, and it is transforming the way cities conduct their business and engage with their communities.

In particular, the following signs of change give us hope that our urban future can be a green and resilient one.

The lines between mitigation and adaptation are blurring. Many cities finally are beginning to reject the false dichotomy between mitigation – the reduction of greenhouse gas emissions – and adaptation – the assessment and management of climate-related risks – which has characterized urban climate action for many years. We see this as a promising and necessary shift in thinking. Reducing emissions and managing climate risk are parts of the same whole, and resilience lies at their intersection. A greener, lower-carbon city is also a more resilient city because it uses finite supplies of energy and water more efficiently and is less dependent on fossil fuels and on highly centralized—and therefore much more vulnerable—energy, water, and food systems. A city that is more aware of, prepared for, and able to adapt to climate impacts will require less expensive and less carbon-intensive investments to bounce back when those impacts occur, as they surely will.

Cities are tripling their bottom line. More and more cities are moving toward a truly triple bottom line approach, merging their economic development, environmental stewardship, and social welfare strategies and investments. Impelled in part by the financial crisis of 2007–2008 and the ensuing economic downturn, more and more practitioners are recognizing that it is difficult, if not impossible, to win support for green solutions that don’t make good economic sense. And those practitioners whose work historically has been rooted in and focused on economic growth and development are seeing more clearly that environmental degradation does have economic costs—and in the case of climate events such as Hurricane Sandy they are massive costs—and that green solutions can be a promising pathway to long-term economic prosperity and resilience.

The silos are shrinking. The institutional and political hurdles we face are higher and harder than the technological challenges. The good news is that we see the silos breaking down. Motivated in part by constrained resources but also by the realization that complex, multidimensional challenges require sophisticated, holistic solutions, people and institutions are coming together in extraordinary and innovative ways to pool ideas and resources and develop integrated solutions at appropriate scales.

Green is going mainstream. In addition, there are positive and promising signs that sustainability is being scaled up and institutionalized in North American cities, especially in cities that have been at it for a while. The focus is shifting from “green” buildings to “net zero” and “living” buildings and from a focus on single buildings—such as a new LEED-certified city building—to the integrated redevelopment of whole neighborhoods or eco-districts. There is also a shift from reliance on big, centralized systems to smaller scale, decentralized solutions, such as local food systems and the on-site management of storm water by residences and businesses. In many places, sustainability is being sewn into the fabric of the community.

The world’s urban population is growing almost exponentially. By 2050 world populations are estimated to be 9.3 billion, and the vast majority of that growth will occur in urban areas in Asia, Africa, and Latin America. Urban populations will increase by about 2.6 billion people, the equivalent of plopping another 315 cities the size of New York City onto the planet in just the next 40 years. Among other things, this will require a doubling of annual capital investments in physical infrastructure—from $10 trillion to $20 trillion—according to a June 2012 report by the McKinsey Global Institute.

It’s up to us to build and share a better mousetrap. The green city movement and the race to resilience aren’t about planting a bunch of trees, restoring a few wetlands, weather-stripping some houses, and checking the box of “gone green.” They are about creating next-generation cities—vibrant and beautiful urban communities in which people enjoy clean air and water, healthy food, access to affordable shelter and meaningful work, and a sense of belonging and worth.