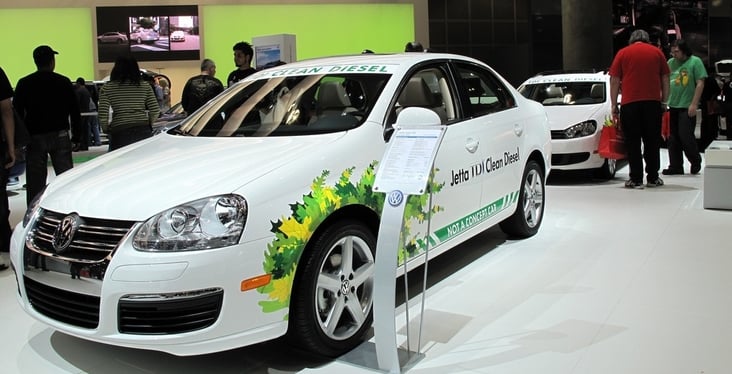 Because diesel engines are more fuel efficient than gasoline engines, diesel has become a popular automotive alternative, especially in markets where gasoline prices are higher than or equal to diesel prices, most notably in Europe and India. The traditional challenge with diesel engines is that they are more polluting than gasoline engines, but auto (and truck) makers have made great strides toward reducing the emissions of these fuel-efficient vehicles, giving rise to the term “clean diesel.” Navigant Research considers diesel vehicles that meet or exceed the EU’s Euro 5 standards or the U.S. Tier 2 standards to be clean diesel vehicles. Clean diesels have been heavily adopted in the European market, where they are credited with dampening the initial sales of gasoline-powered hybrids. It looked like North America, the second largest automotive global market, was primed to follow Europe’s lead. Then came “Dieselgate.”

U.S. sales of clean diesels grew steadily, from $3.3 billion in 2011 to $6.1 billion in 2014, mostly on the back of German automaker deployments. Then, in September 2015, EPA issued a notice that Volkswagen (VW), the leading diesel car provider in North America, was cheating on the tests for nitrogen oxide (NOx) emissions. VW had fitted some 600,000 vehicles sold in the United States since 2009 with a so-called “defeat device” to comply with NOx emissions standards, something the company was having trouble achieving.

Revelations of the scandal continue to play out worldwide. In the United States alone, Volkswagen has settled a number of claims that add up to around $20 billion; the latest estimate on total settlements since the scandal broke tops $24 billion. Meanwhile, 13 VW managers have been indicted, with one manager receiving a sentence in South Korea of 18 months. With VW under fire, U.S. automakers like Fiat Chrysler, GM, and Ford, introduced a number of new diesel models, mainly in light truck classes. Then, late last year, EPA accused Fiat Chrysler of using similar methods to sidestep NOx emission regulations. In May, the automaker announced that it would recall and modify more than 100,000 vehicles as part of a settlement with the U.S. government. With heightened scrutiny from regulators, the future of diesel might appear uncertain but the global market continues to suggest otherwise. Worldwide, the Clean Diesel Vehicles market grew again in 2016, to $306.6 billion, up an estimated 6% from 2015.

At the same time, regional markets do show the impacts of the scandal. In Europe, although diesel’s share of new vehicle sales has fallen slightly, a buoyant automotive market in the region has lifted diesel vehicle in total sales volume. But in the United States, clean diesel sales took a sizeable hit, down 45%, to an estimated $3.3 billion in 2016.

While global diesel vehicle sales figures appear to show initial resilience, this may not last. Hybrids and plug-in electrics carry less skepticism and are becoming increasingly competitive and a number of additional companies, including VW, are entering the market. In the United States, at least, clean diesel’s future is likely limited to utility vehicle classes: light trucks, SUVs, and vans, as well as heavy-duty trucks. Of the German automakers that produced diesel passenger cars for the U.S. market, only BMW seems interested in returning and BMW is simultaneously making a big electrification play.

Unlike North America, Europe’s automotive markets are dominated by passenger cars, limiting the extent to which diesel’s competitive advantage for larger vehicles can mitigate losses in smaller vehicle segments. The result in Europe is a belated surge toward hybrids, and rapid acceptance of PEVs.

Upon its introduction in the late 1990s, the hybrid powertrain caught on in Japan and North America, but had trouble in Europe, where clean diesel dominated. That changed in 2015. Navigant Research estimates sales grew 21% that year and then 23% in 2016. The main beneficiary of this growth, Toyota, saw hybrid sales increase 40% in the region last year. PEVs have also caught on quickly in Europe, with some countries considering moves to ban internal combustion engines by 2025. Growth of this segment will also pull from diesel market share, and will likely do the same with hybrids within a few years.

Learn more about all the advanced vehicle trends and other market forces driving advanced energy in the free market report available for free: