For the 21st Century Electricity System, ‘Innovation is Happening’ 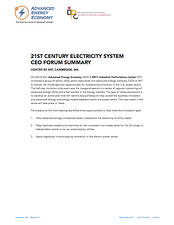 On October 16, Hemant Taneja, board chairman of AEE and managing director of General Catalyst Partners, took the stage twice at GreenBiz’s VERGE Conference in San Francisco. Focusing on the “21st Century Electricity System,” Taneja delivered a “VERGE talk” in the morning and moderated a panel in the afternoon – both drawing on AEE’s invitation-only forum series on the same topic.

“We are convening key stakeholders – utilities, advanced energy companies, and regulators – to create a shared strategic vision for a 21st century electricity system that is flexible, innovative, and delivers on consumer choice,” said Taneja of the 21st Century Electricity System CEO Forums, which are co-sponsored by MIT’s Industrial Performance Center.

In his VERGE talk, in the main ballroom of the Palace Hotel, Taneja outlined the challenges and opportunities of creating an electricity system suited to the new energy technologies of the 21st century. As we rely less on large, central technologies and power plants, and more on distributed and democratized sources like wind and solar, he said, the electricity grid has to adapt – and quickly.

Utilities “must embrace risk and innovation,” said Taneja, “and both regulatory and business models must change.” Adaptation will be local in nature, he explained, as “energy regulation is different in every market. Innovation is happening at the state level.”

Later that day, Taneja was joined by Dian Grueneich, former commissioner of California Public Utilities Commission, and Arno Harris, CEO of Recurrent Energy, for a breakout session focused on how regulators and business can jointly tackle these challenges. “Advanced energy is scaling,” said Harris. “Solar will be the number two new building technology soon, and that has major grid implications.”

While technologies evolve rapidly, the regulatory structure has, for the most part, remained static, impacting the urgency of systemic adaptation. “There’s been very little innovation in the electricity sector for the past 100 years,” said Grueneich. “Now, new technologies are rapidly accelerating that timeline.”

“Today’s system does not provide consumers with a choice,” remarked Taneja. “Distribution and segmentation will be what funds innovation in the future.”

It was agreed upon that this transformation will be a challenge for regulators. “An assumption is that we can make these changes within the existing framework,” Grueneich remarked. “The reality is that energy is one of the most highly regulated areas, and every state has different rules.”

A partnership between regulators and business must be in place before change can occur, said Taneja. “This is not the kind of thing we’re going to solve without the help of utilities. We must work together.”

Just such a partnership is being forged in the 21st Century Electricity System CEO Forums, co-sponsored by AEE and MIT’s Industrial Performance Center. The fourth in this series of invitation-only events will be held in New York City on November 5. The forums bring together electric utilities, advanced energy businesses, and regulatory agencies to discuss how new technologies and services can be adopted more rapidly in the electric power sector. Summaries of the first two forums, held in Cambridge, MA, and San Antonio, TX, are now available for download (click below).

At the NYC forum, participants representing the highest levels of utility management, entrepreneurial energy companies, and government regulators will grapple with alternative business models that would allow utilities and business innovators to transform electricity delivery from a static, risk-averse system to a dynamic and innovative industry that better provides value and reliability in the face of changing resources, consumer options, and extreme weather.

“This is an important next step in the conversation about making the electricity system more flexible, innovative, and responsive to consumer choice,” said Lisa Frantzis, Senior Vice President for Strategy and Corporate Development, who leads the forum series for AEE. “We look forward to working with industry leaders to test out the options that show the most promise.”

Expected to participate in the NYC forum are Richard Kauffman, Chairman of Energy and Finance for the State of New York; Audrey Zibelman, Chairwoman, NY Public Service Commission; the CEOs of the major electric utilities in New York State, including ConEd and National Grid; as well as the CEOs of the New York Power Authority, NYSERDA, and executives of major companies including Verizon, Microsoft, and General Electric.