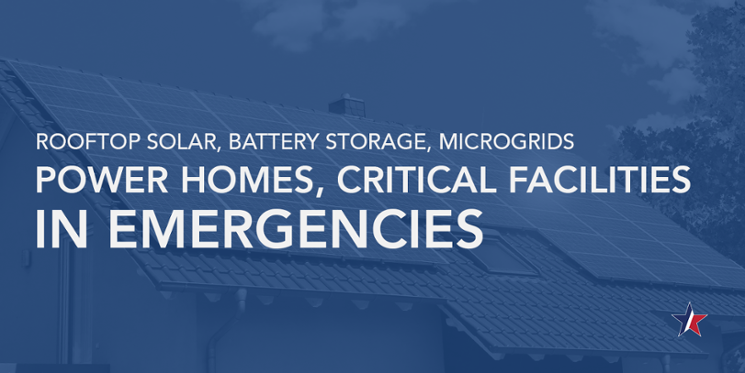 In the winter of 2021, Texas experienced firsthand the dangers of an electric grid dependent on the seamless functioning of a small number of large, weather-vulnerable generation sources. The inability to meet the energy needs of over 70% of the state amid a winter weather crisis signals the system’s clear need for reform; so, too, the unseasonable heat waves that hit Texas this spring, which pushed grid power to its limits. With large traditional power plants taking at least six years to become operational, Texans need adaptive solutions that will meet their needs today. In the face of rapidly growing electricity demand, uncertain forecasting, and aging infrastructure, a new TAEBA report demonstrates the power of distributed energy resources as clean, low cost, and resilient tools poised to bring Texas into the 21st century of electricity provision.

Distributed energy resources (DERs) offer a cleaner and more affordable alternative to the large-scale buildout of power plants and associated transmission. DERs are smaller, more flexible technologies or systems installed on the distribution system or behind a customer meter, including energy efficiency measures, distributed generation such as solar, battery storage, demand response, and electric vehicles and their charging equipment.

The effective resolution of Texas’s reliability challenges will require an all-encompassing approach that includes smaller, distribution connected resources and flexible demand management strategies. With DERs, this kind of approach can be adopted quickly and at a low cost. The TAEBA report, “Future Proofing the Texas Grid with Distributed Energy Resources,” addresses how DER technologies can be relied upon to ensure the continued provision of adequate food, water, shelter, fuel, and emergency services in extreme conditions similar to those experienced during Winter Storm Uri. This report demonstrates the proven benefits of DERs for Texans and identifies the steps that need to be taken to facilitate their widespread deployment. Speaking directly to the needs of Texans, the report presents five use cases that highlight situations where DER technologies and business models are currently serving the state’s needs, while simultaneously contributing to a more resilient energy system overall.

As illustrated in the report, DERs have the capacity to make critical contributions to energy resilience, from the individual households all the way up to regional transmission networks. As generation or storage resources (such as rooftop solar, electric vehicles, or battery and thermal storage), DERs can support transmission and distribution system resilience by contributing to demand flexibility and other grid services when need is greatest. In particular, the report demonstrates the considerable potential that DERs for the continued functioning of facilities that support public safety, emergency response, and medical care when the state is facing blackouts.

The use cases identified in the report emphasize how advances made in the private sector are blazing new trails for energy resilience across the country. As a state that widely serves as an example of the value of innovation and competition, Texas is the obvious candidate for the implementation of such advances.

As we saw during Winter Storm Uri, owners of solar photovoltaic and battery storage systems were able to ride out the power outages and even provide shelter for other members of their communities when the grid failed them. Microgrids that were capable of disconnecting from the grid kept critical facilities and infrastructure afloat. These same benefits can serve Texans facing crises including hurricanes, extreme heat, and other natural disasters that render traditional generation sources inoperable. Electric vehicles, also capable of functioning as DERs, rely on battery packs to store the electricity required by their motors. Configured under a vehicle-to-grid (V2G) system, electric vehicles can send power back into the grid or even into an owner’s home during periods of peak demand or scarcity.

To avoid such periods of grid-related uncertainty, demand response technologies and programs provide electric customers with the ability to reduce, shift, or control their electricity usage in response to time-of-day pricing and a variety of financial incentives. Texas’s utilities, for instance, can offer smart thermostat programs that help to manage periods of high demand in the winter and summer. Such demand response programs create substantial customer savings on energy costs and reduce pressure on the electricity grid that would otherwise contribute to blackouts, while also shielding electric customers from the demand-induced price spikes that some Texans were exposed to during Winter Storm Uri. Texas’s energy efficiency programs can also be tailored to improve “passive survivability” – the ability to maintain critical life-support conditions without additional intervention; a tighter home with less energy demand is less vulnerable and reduces strain on the grid. Increasing the state’s annual energy efficiency targets and associated budgets can put these strategies to work quickly.

Despite these many benefits, barriers continue to exist, limiting the contributions DERs can make to both the grid and consumers. A statewide poll commissioned by TAEBA earlier this year found that Texans overwhelmingly support solutions that enhance grid reliability and provide cost- and life-saving solutions. Widespread adoption of DER technologies is already underway, driven purely by competitive market dynamics, but elimination of administrative barriers is critical to enhancing the ability of DERs to participate in the market. The TAEBA report offers specific policy recommendations that legislators, regulators, and other policymakers can adopt to spur the adoption of DERs in Texas, providing a roadmap for the state on its path to a reliable and resilient grid. Download the report by clicking below.