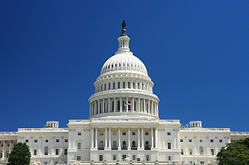 After weeks of discussion, the Senate Environment and Natural Resources Committee voted to advance the nominations of Norman Bay and Cheryl LaFleur as commissioners to the Federal Energy Regulatory Commission (FERC).

The nominations became points of contention for many Republicans and some Democrats, including Committee Chair Mary Landrieu (D-LA) and Sen. Joe Manchin (D-WV). Both would have preferred to see LaFleur, the acting chair, continue in her role as head of the commission following her reconfirmation, while President Barack Obama intended to immediately name Bay as the new chair. Manchin and Landrieu have confirmed they had reached a deal with the White House allowing LaFleur to stay on as chair for an additional nine months once reconfirmed, to be succeeded by Bay, who is currently head of enforcement for FERC.

Ultimately, there was a near-party line vote of 13-9 to confirm Bay, with Sen. Dean Heller (R-NV) the only Republican voting in favor. LaFleur’s vote was 21-1 with Sen. Bernie Sanders (I-VT) the only vote against. While the timing remains unclear, Landrieu expressed hope that the full Senate would approve the confirmations by September.

Rep. Kevin McCarthy (R-CA), the current House Majority Whip, is widely regarded as the frontrunner to take over as House Majority Leader. The Wall Street Journal noted that McCarthy recently said, “energy is the issue I care most about.” Notably, McCarthy has also come out against extending the production tax credit (PTC) for wind and other renewable energy sources, saying wind no longer needs the support, though he voted to extend the PTC in 2012 and comes from a district with substantial wind production. Still, the PTC maintains broad bipartisan support in each chamber and its fate will likely be more influenced by other political dynamics, such as the success of the full “tax extenders” package.

The Environmental Protection Agency’s (EPA) rule on carbon standards for existing power plants appeared in the Federal Register yesterday, officially kicking off a 120-day comment period. A new Wall Street Journal/NBC News poll found that more than two-thirds (67%) of Americans support the new carbon rule and more than half (57%) support greenhouse gas reductions even if they lead to higher utility bills. These results mirror those found in a recent Zogby Analytics poll commissioned by AEE that found 58% support for modernizing our electric grid with low-emission power sources, even if it costs more money. Download the full results of the poll by clicking the button below.