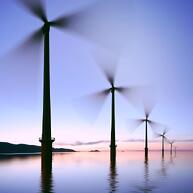 The Department of Energy (DOE) made a provisional commitment to a $150 million loan guarantee for the Cape Wind offshore wind power project in Massachusetts yesterday. With that pledge, Cape Wind will have raised nearly 60 percent of the estimated $2.5 billion it needs to build what could be the nation’s first offshore wind farm.

While the project has moved forward at a glacial pace since it was first proposed in 2001, Cape Wind developers have reached multiple milestones over the last year and expect to begin construction in early 2015. On the financing front, a $600 million loan from EKF, a Danish Export Credit Agency, was approved in February. Copenhagen Infrastructure Partners previously pledged $200 million in financing and Siemens AG has pledged to invest $100 million.

The federal loan guarantee could give the project funding a push across the finish line, once finalized. “Things will happen very quickly after that,” Cape Wind spokesman Mark Rodgers told the Boston Globe. “We would begin construction early next year, in 2015, putting in foundations.”

In addition to the federal loan, Cape Wind developers expect to qualify for the federal Investment Tax Credit (ITC), since they spent 5 percent of the project’s estimate costs prior to the expiration of the wind ITC, along with the PTC, at the close of 2013. While developers of the Deepwater Wind project off the coast of Rhode Island also expect to qualify for the ITC, other offshore wind projects will likely need to see an extension to take advantage of the ITC and move forward.

On the state level, the Massachusetts Green Communities Act (GCA) of 2008 included provisions requiring utilities to enter into long-term contracts for new grid-connected renewable power sources. This provision helped spur National Grid and NSTAR to buy 77.5 percent of the power generated by the Cape Wind project. A recent report found that the GCA creates $1.2 billion in net economic benefits. Helping put the state at the forefront of the offshore wind industry is surely to pay long-term dividends as well.

In a blog post, Peter Davidson, executive director of DOE’s Loan Programs Office, explained the role of federal loan guarantees in catalyzing technologies like offshore wind and bringing down their costs as they reach commercial scale: “Our mission is to take innovative technologies like offshore wind that have been successfully demonstrated in the United States at a smaller scale and help provide the project financing to deploy at commercial scale for the first time. If built, the Cape Wind Project could transform the fishing ports and manufacturing towns in Eastern Massachusetts into a hub for a vibrant U.S. offshore wind industry.”

That is exactly how this announcement was taken in New Bedford, Mass., where a port terminal designed to serve as a staging site for offshore wind installation is under construction. “This loan guarantee helps us make the case that New Bedford is a place for the offshore wind supply chain to set up over time,” New Bedford Wind Energy Center director Matthew Morrissey told the Standard-Times.

DOE’s Davidson also noted in his post that “the lessons…learned from this project can help catalyze similar projects in other areas of the U.S. with excellent offshore wind resources.” While Massachusetts is the clear front-runner, a number of states remain in the race to be the first in the nation to develop their offshore wind resources. The U.S. Bureau of Ocean Energy Management just announced that it would auction off the rights to build wind installations in 80,000 acres of Atlantic Ocean off the coast of Maryland on August 19, in what would be the sixth commercial offshore wind lease awarded by the federal government. Others are located off the coasts of Massachusetts, Rhode Island, Delaware, and Virginia.

In other federal news, the Environmental Protection Agency announced that it would add a second day to the four hearings scheduled on its draft carbon emissions regulations for existing power plants. The all-day hearings in Washington, DC, Atlanta, and Denver will be held July 29 and 30, and hearings in Pittsburgh will be on July 31 and August 1. “We were getting a lot of interest and wanted to provide more opportunities for people to come,” EPA spokesperson Liz Purchia, told Greenwire.

Just how much did political uncertainty impact the wind market as a whole? Find out in Advanced Energy Now: 2014 Market Report.