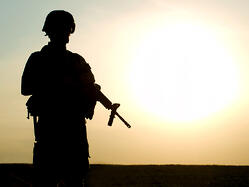 While Congress has been in recess, the White House, Department of Energy (DOE), and Department of Defense (DoD) all announced new initiatives embracing advanced energy.

Acting Deputy Secretary of Defense Christine Fox signed DoD Directive 4180.01 on April 16, codifying the department’s energy policy and responsibilities for its implementation. Although individual branches adopted advanced energy goals over the past decade, the directive represents the first overarching defense energy policy for more than 20 years. The directive establishes DoD energy policy so as to “enhance military capability, improve energy security, and mitigate costs in [the military’s] use and management of energy.” Advanced energy will be critical to achieving these goals.

The directive also focuses attention on planning for energy risks and enhancing the resiliency of military operations to grid or supply challenges. In a report released earlier this year, “Power Surge: Energy Security and the Department of Defense,” the Pew Charitable Trusts outlined the strides the DoD has already made toward improving the military’s energy security by reducing energy consumption and installing on-site renewable energy generation at its facilities. For example, from 2010 through 2012, energy efficiency projects doubled to 1,339 and renewable energy projects jumped from 454 to 700.

The DOE loan program portfolio currently includes over $30 billion in loans, loan guarantees, and commitments supporting over 30 projects, and an estimated 55,000 jobs, nationwide. According to testimony from Jonathan Silver, former LPO executive director, the DOE loan program has a 97% project success rate.

The very next day, the White House held a Solar Summit to advance and support solar power. During the event, DOE announced a $15 million Solar Market Pathways funding opportunity to support state, tribal, and local leaders in developing plans to knock down regulatory and policy barriers and create new policies that encourage solar development and deployment. Policy examples cited include community solar programs and property assessed clean energy (PACE). The administration announced other initiatives, including a program to install 100 MW of on-site renewable power on federally subsidized housing by 2020, doubling EPA efforts within the Green Power Partnership program to boost on-site renewable energy, a Rural Utilities Service (RUS) program, DOE guides on federal financing for clean energy and commercial solar deployment by businesses, and NREL workshops on opportunities for synergy between renewables and natural gas.

EPA is working on greenhouse gas regulations for the existing power sector under Section 111(d) of the Clean Air Act. AEE has built a campaign with its members to ensure that the advanced energy business voice is at the table throughout the federal and state process for implementing these standards. As part of this work, we submitted design recommendations to EPA for consideration as the Agency works towards the June 2014 release of its proposed regulation. Click the link to learn more.