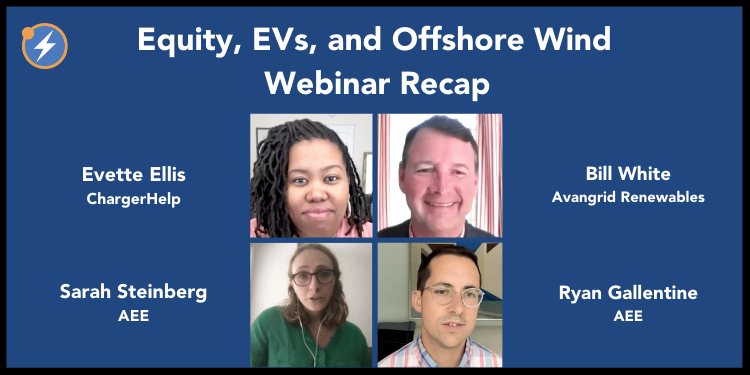 Offshore wind, electric vehicle (EV) technology, and workforce equity have emerged among the hottest advanced energy trends in 2021, with EVs alone making up three of the Top 10 issues considered by state lawmakers this year. In our latest webinar, “Equity, EVs & Offshore Wind: Top State Legislative Issues of 2021 and What’s Driving Them,” these topics were discussed by AEE and industry experts.

After moderator Sarah Steinberg provided an overview of our blog post on the Top 10 legislative issues on state lawmakers’ minds, Evette Ellis, Co-Founder and Chief Workforce Officer of ChargerHelp!, talked about opportunities for expanding equity. She stressed the importance of creating an equitable workforce in emerging industries like EV infrastructure.

“We are now seeking areas where we can be more equitable … as we’re going to be moving forward with those goals in mind, and I just feel like this shift in transportation, in clean energy, is an opportunity for us to really create that space and make sure that we don’t make some of the same mistakes that we’ve made in the past,” said Ellis, whose company provides on-demand EV charger maintenance with technicians drawn from the local area.

She noted that ChargerHelp! is creating jobs and providing training in the EV charging field, focusing on states “where the work exists” based on EV adoption and charging infrastructure deployment, including California, New York, Arizona, Washington, Colorado, Oregon, Florida, and Texas. She called for use of a conscious equity “lens” to achieve equity in the advanced energy workforce as it grows. “We really have opportunities to shift our workforce if we think with that lens.”

Ryan Gallentine, policy director for AEE, reviewed the major trends in vehicle electrification. He cited specifically the trend toward EV use in state government fleets, and noting the general need to electrify heavy-duty vehicles that are publicly owned, such as transit and school buses.

“An interesting trend that I’m seeing is framing some of these efforts to deploy EV infrastructure in terms of resilience,” Gallentine noted. “I think we saw that in Texas after that big winter storm they experienced, and also in Florida, where disaster resilience is a way of life there… It goes to show that, as the transportation sector electrifies, we need to be able to get people out of places, and also build communities that have backup power.”

In terms of EV charging infrastructure deployment, Gallentine said “we’ve seen really significant investment” coming from states, including Colorado just a week earlier passing a bill providing $700 million for investment, “and done in a particularly elegant way,” and Nevada, which passed a package worth $100 million.

On the other hand, Gallentine pointed out the unfortunate reality that “our transportation system is built on the gas tax,” which is causing some states to impose harsher fees on EV owners relative to what drivers typically pay in gas taxes. “We believe EV drivers should pay their fair share for the use of the roads – everyone needs to contribute to that – but we can’t have it be punitive, especially if we are going to have programs to incent customers and businesses to electrify their transportation.”

Though offshore wind development still faces difficulties, like connecting offshore facilities to onshore energy grids, White assured that progress is being made. He insisted that transmission and other issues are “solvable challenges,” suggesting that states and policymakers look to “first-mover states,” like Massachusetts, Connecticut, New York, New Jersey, and now Virginia and North Carolina, for guiding examples.

White seconded moderator Steinberg’s note that economic benefits of offshore wind, such as job creation, tend to attract lawmakers from both sides of the aisle, which could aid in the industry’s continued growth. “This industry has something for everyone,” said White. As growth continues, White again stressed the importance of solving the transmission problem, but still had high hopes for the future of the industry. Noting President Biden’s target of 30 GW of installed offshore wind capacity by the end of the decade, White said, “Let me make a bold prediction. I think very soon, in the next couple of years, the number 30 will actually be doubled, we’ll be at 60, and we’ll go beyond. But in order to do that, we’ll have to solve the transmission challenge.”

Jane Reynolds is AEE’s communications intern from American University’s program. She graduated from Franklin & Marshall College with a Bachelor of Arts in Government with a minor in Environmental Studies.