Later today, the California Senate Select Committee on Energy Efficiency will hold a special hearing to consider ways to improve the various energy finance programs administered by California state agencies. Chaired by State Senator Kevin de León, the Select Committee will hear from California government officials, as well as leaders from other states and the private sector.

As part of AEE’s testimony to the Select Committee, we are today releasing an update to a whitepaper originally released last summer that maps the various agencies responsible for program implementation and asks whether opportunities exist to better coordinate the different programs and align the financing options around a comprehensive state energy strategy.

Today’s hearing – and the release of our energy finance update – takes place in the midst of rapid innovation in energy finance. In just the last six months, a number of states have moved forward with innovative financing mechanisms, including the initial $218.5 million capitalization of the New York Green Bank, the plan to allocate $210 million in federal Superstorm Sandy recovery funds to capitalize a New Jersey Energy Resilience Bank, and the enactment of a Green Energy Market Securitization program in Hawaii. In addition, the private sector has also taken significant steps to unlock new sources of capital with developments such as the first securitization of individual rooftop solar leases by AEE member SolarCity and expansion of crowdfunding opportunities for individual investors.

During this same period, California has added to the scope and resources available through its energy finance programs. Recent significant developments include:

Taken together, these developments over just the past six months represent an acceleration of energy finance innovation across the country, and the infusion of nearly $1 billion in additional funding in California to support advanced energy technologies and make progress towards the state’s ambitious carbon reduction objectives.

Yet it remains unclear whether the various programs are working together as part of an overall strategy to achieve the state’s energy objectives. As illustrated in the following table, a number of state agencies are involved in administering California’s many energy finance programs: 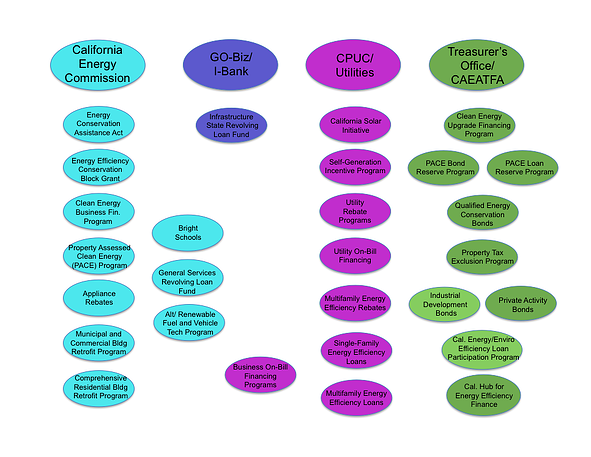 In seeking to improve the state’s energy finance offerings, California leaders should be guided by the following key principles:

California has demonstrated clear national leadership to date in developing and implementing a broad array of energy finance programs for advanced energy technologies, and the new programs, funding allocations and other developments over the past six months provide yet more opportunities to expand the deployment of advanced energy projects.

To meet the state’s energy and carbon reduction objectives, however, state policymakers should seek to better coordinate these existing programs and align the financing activities around clearly stated goals. In addition, focusing California’s available public energy financing resources to spur market development and attract private capital is a critical element in achieving state objectives, and can also provide an important boost to California’s strong and growing advanced energy industry.