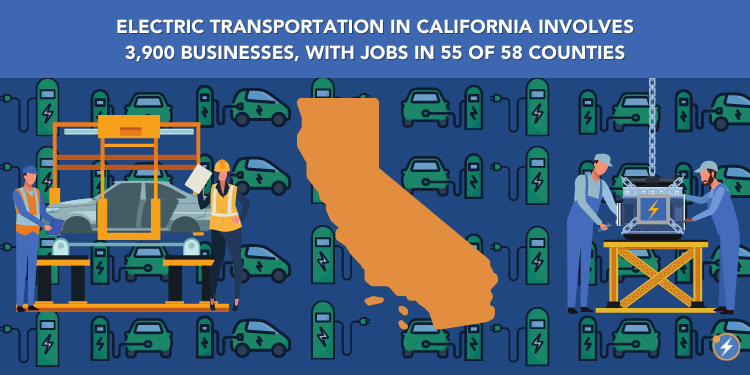 According to a new study prepared by BW Research Partnership for AEE, an estimated 3,900 California companies are involved in the electrified transportation (ET) supply chain. Many of these companies are not ones you’d see on the evening news, but they provide vital components, services, and software that encompass the advanced technology systems featured in electric vehicles and the equipment that supports them. While ET manufacturers (including Tesla) have set up shop elsewhere in the United States, Europe, and Asia, California remains the central production hub of EVs in the country. The California supply chain is a direct result of California’s leadership on the development of EV policies that created the momentum toward zero-emission vehicles we see today.

Contrary to conventional wisdom that ET is exclusively a Silicon Valley industry, these jobs are geographically dispersed across the state, with employment in 55 of the 58 counties as of 2019. The study finds that ET-related employment is expected to nearly double by 2024 to an estimated 68,000 workers as demand for EVs and EV charging infrastructure grows.

The range of occupations and skill sets needed for ET work include ones not traditionally associated with automobile manufacturing, including software and hardware engineering. This presents an opportunity for a more diverse worker pool to join this modern manufacturing workforce. The report examined adjacent and supporting industries with workforces that could easily shift to meet growing ET demand. Industries which together employ 573,000 workers are in a position to transition to ET-related work with relatively little training or upskilling required.

In addition to manufacturing and technology opportunities, the report also called out lithium mining in the region around the Salton Sea as a potential growth area for the state’s supply chain. Lithium is an essential component in most EV batteries, and the region contains one of the world’s largest deposits. Already several well-funded ventures have popped up in the area working to optimize the mining operations needed to make this a commercially viable industry. Barring significant changes in battery technology, global demand for this element is expected to grow exponentially. Securing a domestic supply is a very valuable proposition and could set up a surprising second historic rush of mining interests in the Golden State.

Still, as other states and countries move quickly to transition fleets to electric and set goals and deadlines for transportation electrification, California risks ceding the leadership position it now enjoys. The report recommends a number of policy goals to ensure California realizes the EV market growth projected for the state. Expanding access to training and education for younger, underrepresented workers is one priority, along with focusing those programs on more rural regions of the state. Investments in upskilling California’s workforce is a great way to leverage public funding, providing opportunities for residents from diverse backgrounds to participate in a high-growth industry.

Efforts like Governor Newsom’s proposed 2021-2022 State Budget, which includes $1.5 billion in equitable investment directed toward zero-emission vehicles and infrastructure over several years, would beget the long-term market certainty needed to fuel California’s advanced transportation industry and attract new investment to the state. Expanding data collection on workforce and usage metrics around core incentives would allow the state government and the public better insight into policy effectiveness.

The ET supply chain is a classic California success story, one that its residents should take pride in. California has long maintained a position as the laboratory for policies that address the climate crisis and lead the advanced energy economy; the strength of the industry will create lasting prosperity. No other state is as poised to capitalize on the transition away from internal combustion engines, which is a trend widely expected to continue. However, the competition is growing, and there is no guarantee California will stay in that position forever.