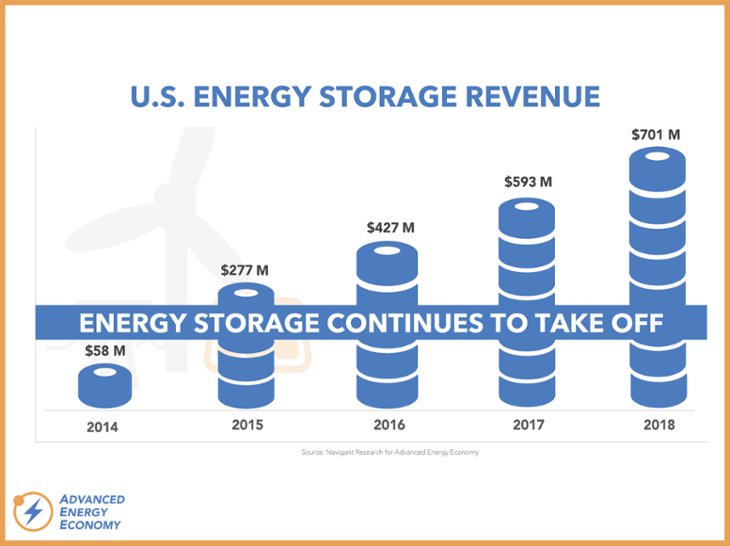 Of all the segments covered, the market for Electricity Delivery and Management products and services recorded the highest compound annual growth rate (CAGR) in the period 2011 to 2018 worldwide (12%); in the United States, CAGR was 4% over that time period. The year 2017 was one of the biggest for electricity delivery and management, recording 28% growth globally and 14% in the United States. While the market plateaued somewhat in 2018, with global growth at 6% and a slight decline in U.S. revenue, Electricity Delivery and Management products will continue to receive significant investment in the next decade. The fastest growth over the period has been in EV Charging Infrastructure and Energy Storage. These markets started at a low base, but revenue has multiplied eight-fold over the seven-year period, recording double-digit gains in 2017 and 2018 in both U.S. and world markets.

Total revenue in this market is primarily driven by large-scale transmission infrastructure and the enabling information & communications technology (ICT) that supports grid management. These areas are both mature but growing strongly in recent years. There are many drivers for this growth. For example, grid-scale renewables require investment in transmission systems to transport power from remote locations to the point of consumption.

At $55.4 billion worldwide, transmission is the largest subsegment of Electricity Delivery and Management. When markets are this big, it is not unreasonable to expect slow, steady growth. As transmission projects often involve large investments, it is also not unusual to see big year-to-year swings, as we saw between 2011 and 2014. But overall, global growth has been impressive, with 12% compound annual growth over the seven-year period, with particularly big years in 2017 and 2018.

In the United States, with the exception of microgrids, CAGR for each of the subsegments in Electricity Delivery and Management has been lower than global growth over this period. Still, 4% compound annual growth for U.S. Electricity Delivery and Management overall indicates strong demand. The U.S. market for these goods and services is growing; other markets are just growing faster.

Energy policy in most countries is set at a federal level, and in the case of Europe, can be significantly affected by the supranational policies of the European Union, which is investing aggressively in energy transition. In the United States, most energy policy is made at a state level. Across the 50 states there are widely different approaches to each, with a handful of states, including California, New York, and Hawaii, blazing an ambitious trail with respect to overall advanced energy deployment and regulatory transformation. Still, considering the infrastructure investments being made in emerging markets like India and China, it is no surprise that the United States, while still an attractive market, is growing less rapidly.

It is noteworthy that Advanced Metering Infrastructure (AMI) had big revenue years in the United States in the past two, jumping 65% in 2017, to $1.4 billion, and holding roughly steady in 2018. AMI revenue had been tapering off from the 2011-12 level of nearly $1.7 billion a year, when these utility investments were driven by the federal American Recovery and Reinvestment Act, reaching a low of $860 million in 2016. But in the past two years, AMI deployment has had a bit of a revival.

Energy Storage Continues to Take Off

Over the past year, renewables plus storage projects were largely the driving force behind new announcements. One of the more interesting projects announced in 2018 was a lithium ion (Li-ion) battery being developed at India’s first-ever wind and solar hybrid project. Hero Future Energies (the owner/operator of the project) stated that the hybrid plant has seen extremely good wind production and consequently must curtail solar because of capacity constraints on the local grid. The Li-ion battery will help mitigate the need for curtailment. Hero states that this will act as a pilot project; if all goes as planned, then the company will retrofit older renewable projects as well as include a storage component in all new projects.

Traditional generation replacement is also a key driver for utility-scale storage. One of the most notable tenders this year was Pacific Gas and Electric’s (PG&E’s) solicitation for energy storage to replace three power plants in its service territory. The gas-fired plants it is replacing had operated as reliability-must-run resources. Deploying strategically located energy storage will help lower operating costs and address congestion issues in the region.

Distributed energy storage systems continue to grow slowly throughout global markets, accounting for 23% of new capacity announced in 2018 (excluding pumped storage). These systems are frequently paired with other generating assets (renewable or otherwise) and are chiefly used for applications like demand charge management, peak shifting, and resilience/backup power.

In 2011, few predicted quite how soon EV adoption would occur. Few auto manufacturers were building battery-powered vehicles, and most of these were hybrids that used a gasoline engine to charge batteries rather than the electricity grid. However, since 2011 the EV market has grown rapidly. Barriers to widespread adoption remain, among them so-called range anxiety – how far EVs can travel before refueling. Battery technology continues to improve, allowing for cars that are able to travel further on one charge. Another necessity for relieving range anxiety is the deployment of charging infrastructure, including DC fast charging.

While there is a strong argument for a “build it and they will come” approach to EVs and charging infrastructure (the more charging stations deployed, the more consumers will buy EVs), the approach to date has been more “wait and see.” The industry has now passed the tipping point, though: Sufficient investors now believe that EVs are a reality and are mobilizing to deploy charging stations.

There are many parties interested, including major oil companies, which are starting to get involved in EV charging. For utilities, EVs present the largest opportunity for load growth in a generation. Municipal, regional, and national governments are driving EV adoption, and are incorporating EV charging networks in their long-term transportation plans. Major equipment providers are focused on the charging market, including Siemens, Schneider Electric, and ABB, while private charging networks like EVgo are expanding rapidly. The market for EV charging infrastructure really took off in 2017, driven by an increase in EV models and charging developments such as ultrafast charging (UFC), a high-powered version of DC Fast Charging. Since 2017, there has been an increase in the number of companies developing and producing UFC equipment. UFC provides over 150 kW of power output from a charging port. A significant degree of attention is now focused on fast charging corridors that enable long-range all-electric driving. Governments in leading national markets – the United States, Norway, the Netherlands, Denmark, and South Korea – have been influential in spurring automakers and the charging industry to begin incorporating ongoing advances in equipment in existing and future fast-charging networks.

Often, the United States leads the world in technology adoption. However, the energy market is different. In other mature energy markets, competition among energy suppliers and more ambitious decarbonization policies are fueling more rapid investment in Electricity Delivery and Management technologies. But in the U.S. market, Microgrids are a shining light.

In 2018, U.S. revenue from Microgrids was just under $2.5 billion, accounting for 35% of the global market. This is due, in part, to U.S. electricity networks being, in general, less reliable than in Europe. According to the Council of European Energy Regulators, the United States lost an average of 244 minutes per customer in 2012, compared with 95 minutes per customer in France, 81 minutes per customer in the United Kingdom, and 16 minutes per customer in Germany. Large customers such as hospitals, university campuses, and military bases are increasingly deploying microgrid technologies so that they can island themselves from the grid and become energy self-sufficient in the event of a power outage

Emerging markets have also been an area of growth for microgrids, as power grids in these markets are among the least reliable. While 2017 saw a significant increase in the adoption of microgrid technology, the market was not sustained in 2018, as deployment slipped back closer to 2016 levels.

One indication of the growth trajectory comes from the Microgrid Deployment Tracker, in which more than 200 new microgrids operating and under development in Q2 2018 were identified around the world. The United States remains the market leader in terms of projects currently operating and connected to a distribution grid. In addition, the remote microgrid segment has also declined as an overall portion of the total market, but some of this is due to better availability of data for grid-tied systems. It also reflects growing interest in alternative aggregation models (such as grid-dependent virtual power plants) in regions traditionally dominated by remote microgrids (such as Australia).

The microgrid market has made leaps and bounds over the past two years, particularly on controls platforms, greater interest in modular, plug-and-play offerings, and creative business models. The increase in extreme weather events, threat of wildfires, and localized phenomena such as earthquakes and volcanic eruptions all build the business case for greater energy resilience. Microgrids can serve as platforms for other services as well, including thermal energy, water, and basic telecommunications infrastructure. As a result, Navigant Research expects total microgrid capacity to grow from 3.2 GW in 2019 to 15.8 GW by 2027.