Electric vehicles (EVs) have burst on the consumer scene in recent years, with a wide array of sedans, SUVs, sports cars, vans, and trucks already available for purchase, and national sales triple the number of hybrid vehicles sold in the same period of development.

To further accelerate the adoption of this groundbreaking transportation technology, it will be necessary to continue to promote the economic and environmental benefits of electric vehicles, drive economies of scale in vehicle manufacturing, and facilitate EV learning by doing—or, shall we say, driving. This is where Drive Electric Northern Colorado (DENC) comes in.

DENC, a project generously supported by Advanced Energy Economy (AEE), is a community-wide deployment initiative designed to achieve the widespread adoption of electric vehicles in the Northern Colorado region. DENC was launched a year ago through a partnership between the Electrification Coalition, the cities of Loveland and Fort Collins, and Colorado State University. The initiative brings together local government officials, local and national businesses, car dealers, real estate developers, financial institutions, community organizations, and EV enthusiasts. Since the program launched in February 2013, DENC has made great strides in getting more EVs on the road. The initiative has helped the Northern Colorado region achieve 2013 EV sales numbers that were 42 percent higher than the national average. What’s more is that regional EV sales in the fourth quarter of 2013 were more than 71 percent above the national average!

Perhaps the best way to convince a person to buy an EV is to provide them with an opportunity to drive one. In fact, surveys show that the number of consumers willing to consider purchasing an EV increases by 50 percent or more after a test drive. To that end, DENC makes it a priority to put drivers behind the wheels of EVs through ride-and-drive events. So far, more than 650 Coloradoans have driven one of the many EV models that DENC partners have brought to more than 15 of these events. DENC has also created a three-part educational program with the Public Service Credit Union to introduce consumers to the cost savings that EVs provide so that they are well informed of the financial benefits and total cost of operation when making their decision. 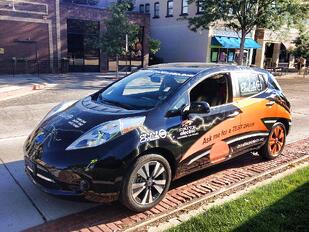 DENC has formed numerous public-private partnerships throughout the region to increase community awareness, involvement, and enthusiasm. The results are all around us. EVs are more commonly seen on the streets of Fort Collins and Loveland in the past year because consumer sales have increased and because the cities of Loveland and Fort Collins have doubled the combined number of EVs in their municipal vehicle fleets from five to ten. Many prominent local businesses have also integrated EVs into their commercial fleets, with some converting their entire fleet to electric. A well-known local brewery, Odell Brewing Company, even released “Plug-In Pale Ale,”’ the first-ever electric vehicle inspired beer.

On the infrastructure side, the total number of electric vehicle charging stations in the region has increased from one at the start of the program to 16, with more already planned for installation in 2014. This includes two DC Quick Charge stations, capable of charging an EV in under 30 minutes. EV drivers in Northern Colorado can now drive confidently anywhere throughout the region because they are never more than six miles away from a charging station.

DENC is excited to continue expanding fruitful community partnerships and driving EV adoption throughout Northern Colorado in the coming years. The information and data DENC has collected is also helping to create a replicable and scalable model for EV deployment so that communities across the United States will be able to benefit from our lessons-learned and begin their own deployment efforts. With the entire Northern Colorado community, DENC looks forward to leading the electrification of our nation’s transportation sector.

To learn more about DENC and electric vehicle deployment, please visit us at www.DriveElectricNoCo.org.

Electric vehicles are experiencing huge growth as part of the larger advanced energy industry. Just how much have EVs grown over the past two years? Download AEE's 2014 Market Report to find out: