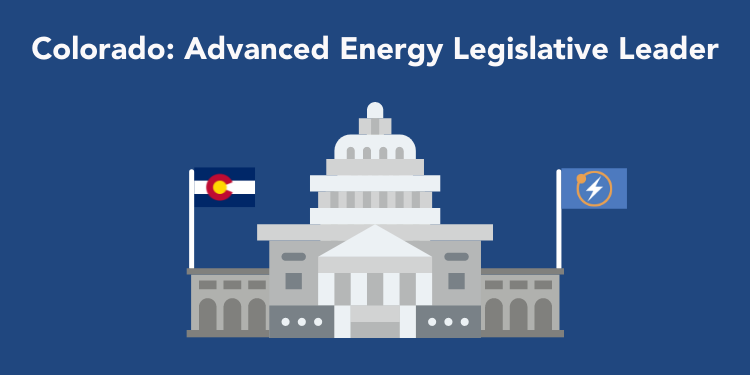 Following a year complicated by the unique challenges and constraints of responding to a public health crisis, the Colorado Legislature lost no time this legislative session diving into an ambitious, jam-packed policy agenda. With over 30 bills on advanced energy and transportation across the finish line by the time the Legislature gaveled out on June 8, this session proved to be another banner year for Colorado’s advanced energy industry. Taking this latest boon of policy wins together with its 62,000-strong (and growing) advanced energy workforce, Colorado has flexed its position of strength and once again showed itself to be a leader to watch in the West.

This package of bills adds up to $51 million of new investment, with the lion’s share dedicated, via Senate Bill (SB) 230, to existing advanced energy finance programs supporting energy retrofits and electric vehicle charging (via the the Colorado New Energy Improvement District, Residential Energy Upgrade loans, and Charge Ahead Colorado) and the Colorado Clean Energy Fund (the state’s green bank). AEE supported SB 230, especially the bill’s action to capitalize the Colorado Clean Energy Fund and expand its public-private partnership capacity with $30 million in much-needed seed capital. SB 230 also supports the implementation of another bill recently approved by the Legislature, House Bill 1286, by providing initial funding for the administration of the forthcoming energy use benchmarking and performance standards program for buildings (more on that later). Other successful advanced energy stimulus bills included in this year’s package included:

This year’s legislative session also revealed broad support for bold action in Colorado’s buildings sector, which surfaced in the legislative debate through four interrelated bills seeking to drive demand-side energy improvements. SB 246, which directs regulated utilities to develop customer incentive programs for the adoption of high-efficiency electric appliances and all-electric heating technologies, was particularly notable for its sponsorship by Senate Majority Leader Steve Fenberg and for its support from organized labor due to the inclusion of qualified contractor standards for some commercial projects. Another high-profile buildings-focused bill was HB 1286, which creates a statewide energy use benchmarking and performance standards program for most large commercial, multifamily, and public buildings. AEE supported both SB 246 and HB 1286 through twists and turns this session.

Running parallel to these bills, SB 264 directs gas distribution utilities to file “clean heat plans” with the Public Utilities Commission that result in specified greenhouse gas emission reduction goals for 2025 and 2030 (notably, the bill enables gas utilities to utilize a broad range of technologies and strategies – including green hydrogen, beneficial electrification, energy efficiency, and recovered methane – to meet these targets). HB 1238 updates demand-side management standards for regulated gas utilities at the Public Utilities Commission, including changes to the determination of cost-effectiveness to factor in the social cost of carbon and methane. Together, these bills add up to a forward-looking bench of energy efficiency and electrification policies that could provide inspiration to other states looking to comprehensively reduce emissions across their building stock.

The legislature also expressed bipartisan support for renewable energy generation and energy storage, both distributed- and grid-scale, this session. One of the first energy-related bills out the gate this session, SB 20 clarifies the property tax treatment currently applied to renewable energy facilities to also include energy storage and community solar gardens. This bill handily sailed through policy committees early on, earning it a signature from the Governor with a few months remaining in the session. AEE also supported HB 1284, which eliminates inconsistencies across local governments’ implementation of the Fair Permitting Act of 2011 in order to ensure fair permitting costs for solar energy installations. Another significant energy bill sponsored by Senate Majority Leader Steve Fenberg, SB 261, institutes a number of positive clarifying changes to how distributed solar is regulated, including allowing customers to meet up to 200% of their projected future energy use with behind-the-meter solar, ultimately increasing the size of onsite distributed generation facilities. This bill also, among other things, contains provisions around virtual net-metering and sets the stage for follow-on regulatory activity to establish tariffs and programs that further promote distributed energy resources for their grid benefits.

Two other triumphant bills were SB 72 and SB 260, respectively. AEE was deeply engaged at the Capitol in support of both these bills. The overwhelming bipartisan support for SB 72 in successive vote counts in both Houses signals Colorado’s readiness to modernize its electricity grid and take clear next steps on coordinating with other Western states on the path to a future regionally integrated system. (For a fuller recap on SB 72, check out AEE’s previous coverage of this bill in our blog post and press statements from key junctures in the bill’s passage.) Likewise, SB 260 signified a historic leap forward for securing reliable, long-term funding for Colorado’s transportation system, including a total investment of over $730 million to accelerate Colorado’s zero-emission vehicle market over the next decade.

No recap of this year’s advanced energy and climate legislative activity would be complete without mentioning one of the most talked about bills of the session – SB 200, which eventually morphed in HB 1266 following negotiations between the legislative sponsors, the Polis Administration, and stakeholders. In its initial form, SB 200 required the Air Quality Control Commission to adopt final implementing rules by March 1, 2022, to enforce sector-specific greenhouse gas emission targets, and created an environmental justice ombudsperson and environmental justice advisory board. That bill vehicle stalled in the Senate, but portions of it – including sector-specific targets for the oil & gas sector industry and the industrial sector, as well as a series of measures to expand environmental justice communities’ representation in air quality decision-making processes – were preserved in HB 1266, the last bill that the legislature took up prior to adjourning. After hours of legislative debate, the bill passed both Houses and has since been signed into law by the Governor accompanied by an Executive Order clarifying language that some stakeholders interpreted as receptive to a future cap-and-trade system.

Finally, two other noteworthy bills that are worth giving a nod to. Per HB 1269, the Colorado Public Utilities Commission is set to open a new regulatory docket, on or before January 15, 2022, to undertake a feasibility and impacts assessment of an opt-out community choice energy model in Colorado. More broadly, another bill, SB 272, gives the Commission more access to external expertise to navigate the big-ticket energy issues in its purview. AEE looks forward to working with the Legislature and the Governor’s Office on complementary future policy action to ensure the Commission is set up for success in implementing Colorado’s comprehensive energy objectives.

Though the legislative session has wrapped with an impressive scorecard for advanced energy and transportation, there is still more work ahead at the Gold Dome. The trajectory of discussions on the Hill surrounding the federal bipartisan infrastructure deal and a possible budget reconciliation package with advanced energy provisions will undoubtedly spill over to the next round of economic recovery discussions in the state. For one, there is still the matter of how to spend the $1.8 billion pot of remaining federal stimulus dollars received by Colorado. It is anticipated that bipartisan workgroups will be formed to dive deeper into legislative proposals on that front during the interim session this Summer and Fall. Details are largely yet to be determined for interim session activity, but it is expected that there will be a Task Force on Economic Recovery and Relief Cash Fund and that workforce development will also figure prominently into legislative discussions as a key focus.

With a robust implementation agenda ahead given the sheer scope of new policies on the books, plus more to transpire around a lasting economy recovery powered by advanced energy, one thing’s for sure: AEE and our industry members will continue to be at the ground floor working with decision makers and allies to advance smart public policy that supports Colorado’s strong advanced energy leadership in the West, and nationally.

AEE has published reports quantifying the economic impact of investing stimulus funds in advanced energy technologies in multiple states, including Colorado. To download one or more of these reports, click below.