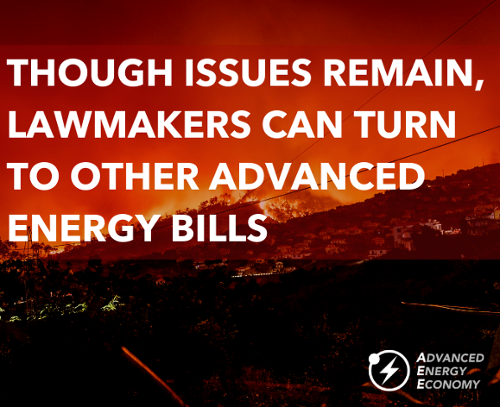 Just before the California Legislature adjourned for Summer Recess, Gov. Gavin Newsom signed a historic wildfire fund package seeking to balance the welfare of  wildfire victims, investor-owned utilities (starting with PG&E, which is in bankruptcy proceedings due to its wildfire liabilities), and utility employees with a commitment to uphold California’s advanced energy leadership. The package navigated the formal legislative process in a matter of days to meet the Newsom Administration’s declared deadline of July 12, and most importantly, just in time to avert the looming threat of credit rating downgrades for the state’s other two investor-owned utilities, San Diego Gas & Electric and Southern California Edison.

Upon taking office in January, Gov. Newsom inherited items left over from last year’s complex negotiations around Senate Bill 901, which did not make significant changes in the state’s strict liability law for investor-owned utilities (IOUs), but did approve the use of ratepayer monies to pay for damages. SB 901 also created a Commission to make recommendations on how to manage the long-term costs and liabilities associated with utility-caused wildfires. The new Governor’s charge for legislation on catastrophic wildfire response came following two events: PG&E filing for Chapter 11 bankruptcy on January 29 and CalFire’s official announcement, in May, that PG&E’s transmission lines were responsible for the Camp Fire. As a result, wildfire deliberations once again consumed the better part of the legislative session’s focus on energy issues.

The Governor’s wildfire safety and accountability package came in the form of Assembly Bill 1054, joined by companion bills (and re-purposed Budget bills) AB 110 and AB 111, with all signed July 12. The legislation creates a Wildfire Fund to give utilities access to capital to facilitate payment of wildfire-related liabilities. In order to establish this fund, the bill offers two pathways: 1) a $10.5 billion liquidity fund, financed by a surcharge on ratepayers bills which would act as a line of credit intended to allow quick resolution of claims; and 2) a $21 billion insurance fund option, financed by a surcharge on ratepayer bills and initial and annual contributions from utility shareholders. Furthermore, AB 1054:

Overall, AB 1054 makes important improvements to the wildfire cost recovery framework and provides additional certainty as the state mulls over PG&E’s restructuring. While the bill did not garner immediate consensus or satisfy all legislators’ concerns, the Legislature ultimately decided to not let the perfect be the enemy of the good, recognizing the urgency to contain the far-reaching impacts of PG&E’s bankruptcy for ensuring affordable, reliable, clean electricity service and modernizing the state’s energy infrastructure.

AEE’s role in all this has been to vigilantly monitor the PG&E bankruptcy development, as well as other wildfire-related matters relevant to the advanced energy industry, across the relevant Administration, legislative, and regulatory forums to ensure that the business voice is heard. Our focus has been three-fold: 1) protecting long-term renewables contracts (involving at least 387 individual PPAs with 350 counterparties for a total of $42 billion and over 13 GW of capacity) at risk of re-negotiation or cancellation during PG&E’s re-organization; 2) ensuring that the Capitol response provides a durable path for healthy, financially stable, and responsible utilities that are able to keep investing in the best available and emerging advanced energy innovations; and 3) ensuring that all advanced energy products and services are fairly considered as part of the diverse toolkit of solutions for building grid and community resilience.

In May, AEE delivered a memo to the Newsom Administration, as well as relevant Capitol stakeholders, responding to the recommendations presented in the Governor’s wildfire strike team report and the SB 901 Commission’s report. AEE also tracked leadership changes at PG&E as it refreshed its Board of Directors and executive leadership. Throughout, AEE has stressed the importance of the state’s energy goals and the need for all utility leadership to commit to the state’s priorities.

By and large, AB 1054 took care of investors’ immediate concerns about the utilities’ financial stability and having a mechanism in place for swiftly responding to future catastrophic events. That said, unfinished business remains. This year’s wildfire legislative package respected legislators’ insistence to keep “inverse condemnation” reform off the table, steering clear of overturning the state's strict utility liability standard while conceding some clarifications. It also left complex home insurance and affordability issues for another day. Inevitably, too, rate hikes will be coming to foot the bill for grid upgrades and implementing the state’s newly tightened safety and oversight regulations.

In the meantime, action proceeds through the federal bankruptcy court, where PG&E is anticipated to unveil its proposed re-organization plan in August. From there, the CPUC has authority to approve the plan, in whole or in part, or propose its own counter plan. The CPUC has emphasized its commitment to evaluating PG&E’s re-organization plan while ensuring California’s advanced energy priorities remain intact.

The wildfire conversations have also spurred structural changes at the CPUC. While talk of reforming the CPUC is not new, PG&E’s bankruptcy spurred new urgency to re-focus the agency and improve overall efficiency so the CPUC can nimbly advance innovative, market-growing policies and programs (on this, AEE has historically offered recommendations to the current and prior Administration). The Governor’s newest appointee, Marybel Batjer – known for her experience reforming bureaucratic state agencies – will take the helm as President of the Commission. AEE stands ready as a resource to incoming Chair Batjer as she settles in and takes on the task of redefining the CPUC.

When legislators return from Summer Recess on August 12, they will come back to a jam-packed end of session. Now that wildfire questions have been worked out for now, the Legislature turns back to regular order of business, including a slate of advanced energy bills. Most of these bills face their next hurdle in Senate and Assembly Appropriations, where they must avoid or get voted off the Suspense file in order to proceed to the floor.

AEE is supporting a number of advanced transportation bills this year, while also voicing our perspective on other pieces of legislation that would have an impact on our industry. One of the supported bills is AB 1046, which directs the Department of Finance to pinpoint, and secure, a stable funding source for the Clean Vehicle Rebate Project (CVRP), which regularly runs out of money, creating uncertainty in the market for electric vehicles (EVs) and other qualifying vehicles. The bill is headed to Senate Appropriations and has garnered significant stakeholder interest. AEE is also supporting bills that promote coordinated vehicle-to-grid integration strategies; scale deployment of clean medium- and heavy-duty vehicles and equipment; and expand public access to EV charging infrastructure.

We will report back on these bills when the California legislative session wraps up in September.

At AEE's new regional energy policy event, coming up Oct. 16-17 at the J.W. Marriott Phoenix Desert Ridge Resort & Spa, you will hear from an influential group of advanced energy business leaders and policymakers who will discuss ways to accelerate advanced energy growth through state and federal policy in California and across the Western United States. Join us by clicking below!