Global biofuel markets are driven by a unique elixir of national annually adjusted production targets, oil prices, and desire for energy independence. Biofuels have endured more than a decade of scrutiny for everything ranging from subsidies to environmentalist concerns to possible impacts on food prices. Despite all of this, biofuels have proven a resilient global market led by the United States and Brazil. Revenue from ethanol production dropped dramatically in 2016 – down to $37 billion globally, and to $20.6 billion in the United States – as ethanol prices have fallen in competition with low-priced oil (see figure below). In both worldwide and U.S. markets, ethanol revenue hit its lowest point in the six years Navigant Research has been tracking the industry. In addition to the low oil prices, and resulting low gasoline prices, low corn prices contributed to the decline in ethanol pricing. Corn prices also fell to the lowest in a decade in October 2016, right after the U.S. corn harvest ended.

Generally, during years in which ethanol production exceeded the RFS mandate, ethanol has traded at approximately 70% of the price of gasoline, due to its lower energy content. The other factor affecting ethanol margins is the price of feedstocks (corn, sugar beet, and sugar cane). When the price of these feedstocks is too high relative to the price of ethanol, some plants shut down as they become unprofitable. Conversely, as supply decreases, the price of ethanol rises until the mandate is fulfilled. 2016 was kinder to biodiesel: The U.S. produced 1.5 billion gallons of biomass-based diesel in 2016, 20% more than in 2015. U.S. revenue from biodiesel surged from $3.2 billion in 2015 to $4.5 billion in 2016 due to a jump in the price of the fuel to $2.96 per gallon. 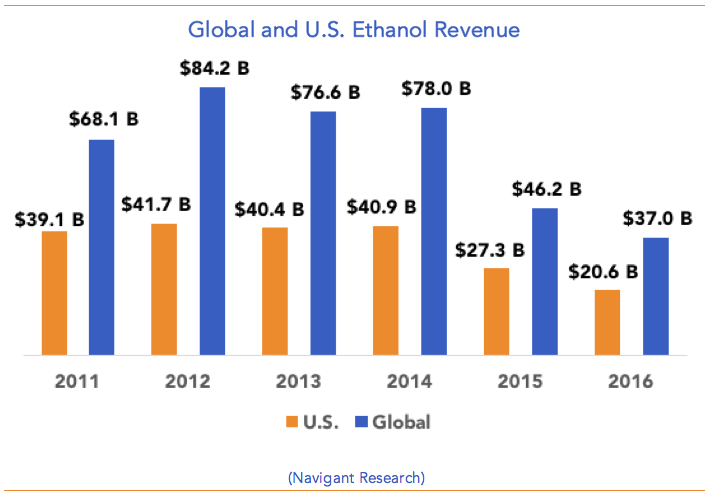 This surge was due to higher local diesel prices and a significant increase in the price of vegetable oils, but was also in line with global pricing for biodiesel. Global revenues only increased slightly, 5%, to $20 billion.

Learn more about the biofuels market, as well as the entire size and scope of the advanced energy industry, by downloading the free report below.