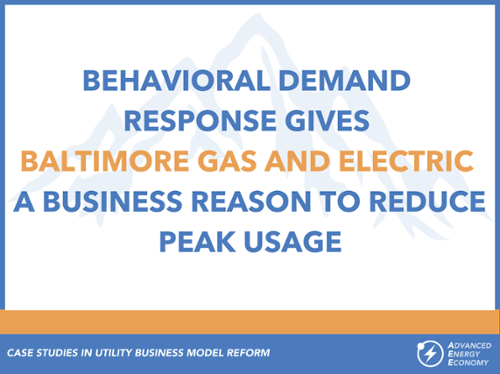 At most times of the year, much of the electricity generating capacity in the United States stands idle. That's because the electric power system is built to handle demand at its peak — those few sweltering summer days when everyone's AC is running full blast. What utilities pay for power at those times of peak demand drives up the price we pay for electricity. In fact, approximately 10% of infrastructure investments in the United States focus on serving demand in just 1% of hours of the year. This leads to the question: are there more efficient ways to manage this demand — and make it in utilities' business interest to implement them?

As part of a behavioral focus powered by a partnership with Oracle (formerly Opower), the Baltimore Gas and Electric (BGE) SmartEnergy Rewards program shows one way to shrink peak demand, save customers money and reward the utility at the same time.

BGE, which is Maryland's largest utility, began rolling out its SmartEnergy Rewards program to reduce peak demand in 2012 as part of its overall energy efficiency program. The program works by compensating customers with rebates on their electricity bills if they reduce their energy usage during a handful of peak demand events (referred to as Energy Savings Days) each year.

SmartEnergy Rewards is more than just a successful test case. It is the largest dynamic pricing program in the nation, with 20% of all residential dynamic pricing customers in the United States as of 2017.

The large comparative size of the program, with over 1.1 million customers enrolled, results from it being an opt-out program (i.e., customers with installed smart meters are enrolled automatically unless they take action to decline), rather than the more typical opt-in. Its successful adoption has also been buoyed by five additional Maryland policies, which have encouraged BGE to grow the program:

● Energy Efficiency Resource Standard. Since 2008, Maryland has set energy efficiency goals through the EmPOWER program. Utilities must achieve annual incremental cost-effective energy savings of 2% of retail electric sales through 2023. At the time the SmartEnergy Rewards program was created, Maryland also had a target of 15% reduction in per capita peak demand from 2007 levels by 2015.

● Decoupling. Maryland has implemented full revenue decoupling since 2007. This policy breaks the link between the amount of energy a utility delivers to customers and the revenue it collects. Instead, revenues are adjusted so that utilities receive fair compensation to cover their costs and to provide a fair return to shareholders delinked from fluctuations in sales.

● Capitalization of Operating Expenses. Utility operating expenses for energy efficiency and demand response in Maryland can be treated as capital expenditures, which are able to earn an authorized return on investment on par with other capital assets in the utility's rate base, amortized over five years.

● Wholesale Revenue and Shared Earnings. Maryland authorizes utilities to sell aggregated demand response commitments into the PJM capacity, energy and ancillary services markets. The earnings from these sales are mostly passed through to customers to help finance incentives, but utilities keep a portion of the revenue.

● Smart Meter Cost Recovery. In 2010, BGE was granted approval to move forward with an advanced metering infrastructure (AMI) deployment, though cost recovery was deferred until the investments proved cost beneficial.

SmartEnergy Rewards has consistently achieved customer participation levels above 70% because it is simple for customers to understand and it provides potential bill savings with no downside.

Since the program's inception in 2013, the number of eligible and participating customers has steadily increased as BGE has rolled out smart metering infrastructure, resulting in over 300 MW of peak demand reduction each year — about the size of an average coal-fired power plant.

BGE is able to sell these energy and peak demand reductions directly into the PJM wholesale market. These savings generate dollar benefits for customers through avoided costs and wholesale energy price suppression.

The SmartEnergy Rewards program, along with BGE's overall energy efficiency initiatives, has received significant praise over the past several years. BGE was ranked fourth among 51 U.S. electric utilities in ACEEE's first "Utility Energy Efficiency Scorecard" in 2017 and the utility achieved the highest reduction — 2.54% — as a percentage of total peak demand of all utilities measured.

But one of the main reasons for BGE to embrace the program has to do with smart grid deployment.

The utility was authorized to earn a 9.75% return on equity (included in base rates) for its deployment of AMI to all customers, but only if it could show a positive cost-benefit ratio for the investment. With $687 million in capital expenditures and $165 million in operating and management spending at stake, BGE needed to make a strong business case for AMI.

The SmartEnergy Rewards program gave the utility the dollars-and-cents evidence it needed to recover those costs — and make peak demand reduction a part of its business model.

The full case study, "Maryland's Behavioral Demand Response Program — Baltimore Gas & Electric's SmartEnergy Rewards," as well as four others, are available for download by clicking below.