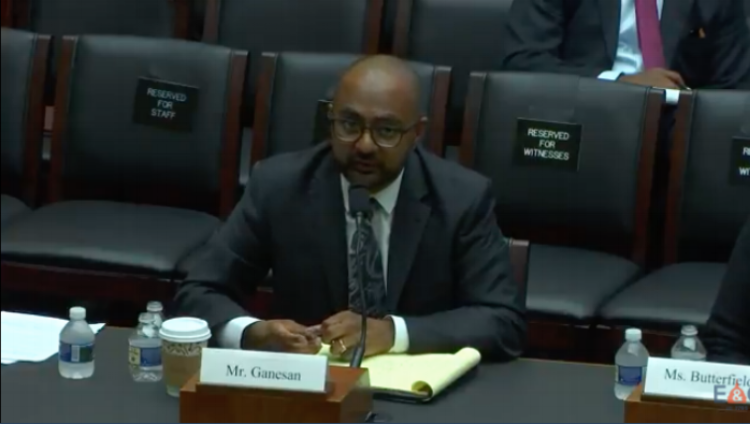 Over the past week, the energy industry has been rocked by the release of a Notice of Proposed Rulemaking (NOPR) from the Department of Energy (DOE) to the Federal Energy Regulatory Commission (FERC) that, if implemented, would upend the wholesale electricity markets where advanced energy is thriving. AEE is deeply involved in this proceeding, and has joined with a diverse group of energy industry associations to express concern about the aggressive timeline for this rulemaking called for by DOE. But while DOE pushes for a quick action on its radical proposal, the House Energy and Commerce Committee is undertaking a thoughtful series of hearings, entitled Powering America, on electricity and the role of the federal government for energy policy. Last week, AEE was asked to testify, and took the opportunity to explain how technology innovation, declining costs, and consumer preference are driving growth of the advanced energy industry – and will do so even more, if the nation’s electricity markets are open for competition from all technologies.

Starting last year, the Energy and Commerce Committee began by reviewing the Federal Power Act, and since then have held seven hearings in the Powering America series this year. Executives from grid operators at Regional Transmissions Organizations (RTOs) and Independent System Operators (ISOs), state commissioners, market participants – including AEE members Direct Energy, EnerNOC, and Stem – trade associations, environmental advocates, and others have all come before this Committee to share their expertise and knowledge. On Sept. 26, AEE was invited as a majority witness to testify before the Committee on technology’s role in empowering consumers (documents and hearing video here).

In contrast with much of the news coming out of our nation’s capital, bipartisanship has been in the air at the Powering America hearings held by the Energy Subcommittee. The vast majority of legislators have indicated support for competitive markets and the foster robust competition these markets should foster between all technologies. AEE’s testimony followed these exact themes, touting the benefits of advanced energy for modernizing the grid, driving economic growth, and meeting consumer preferences.

First, declining costs and consumer preferences – including those of Fortune 100 and Fortune 500 corporations – will continue to drive market growth and innovation. The combination of declining prices for advanced energy technologies and demand from large energy users will drive growth in the advanced energy industry.

Second, advanced energy enhances the reliability and resilience of the grid by increasing fuel diversity, promoting a more flexible energy system, and responding to extreme weather events. Grid operators are now routinely managing high levels of wind and solar generation, sometimes exceeding 50% of load, without compromising reliability, levels that would have been viewed as impossible just a few years ago. During the 2014 Polar Vortex, grid operators were able to turn to demand response and wind energy, along with nuclear power, to meet electric power needs and keep the lights on even when other resources failed due to extreme cold.

Third, federal policy should pursue technology-neutral competition in wholesale markets to maximize benefits to consumers and enhance the reliability and resilience of the grid. Technological innovation benefits consumers by increasing competition in the marketplace between energy technologies, increasing customer choice, and driving down the cost of electricity.

Members of Congress from both parties expressed interest in the role of advanced energy on our grid and what the federal government can do. In response to a question from Committee Chairman Greg Walden (R-OR) about ensuring competition among all technologies, Ganesan noted that federal markets should be technology neutral, but in some cases regulations suffer from legacy problems such that new technologies are not fairly compensated for providing services like frequency regulation to the grid. Rep. Pete Olson (R-TX), representing areas impacted by Hurricane Harvey, also asked what could be done to reduce the harm to the grid from severe weather events. Ganesan referenced how advanced energy technologies, such as combined heat and power, microgrids, and many distributed energy resources (DER), helped hospitals and emergency services to stay online in events like Superstorm Sandy. Rep. Mike Doyle (D-PA) also pointed to the value of market-enhancing rules from FERC that can drive savings for consumers, such as the proposed rule to reduce barriers for storage and aggregated DER, which AEE strongly supports.

While news headlines may not have popped from this hearing, we at AEE are pleased with the Committee’s thoughtful approach to making energy policy. The Committee and its members have expressed its support for ensuring competitive markets have a technology-neutral approach to ensure a reliable and affordable grid for all customers. We welcome this support.