VA Gov. Northam Hears from AEE, Business Leaders About How to Reach His 100% Clean Energy Goal 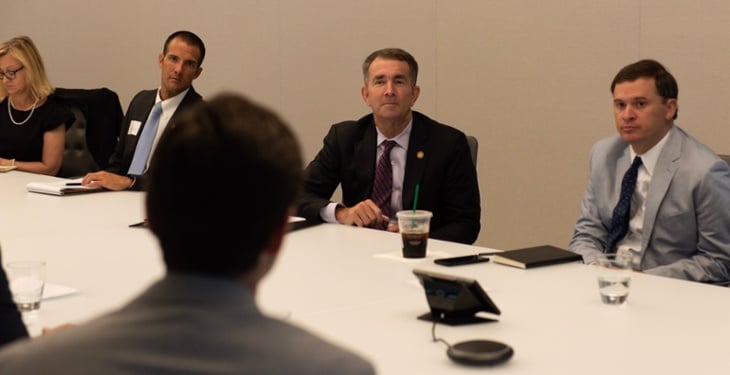 Advanced energy momentum is building in the Commonwealth of Virginia. Last week, Gov. Ralph Northam met with 10 AEE member companies – executives from Apex Clean Energy, CLEAResult, EnelX, EVgo, Greenlots, Microsoft, Schneider Electric, Sun Tribe Solar, Veolia, and Volkswagen of North America. The Governor opened the meeting by asking the companies to share what Virginia can do to help them create more jobs in the Commonwealth. He had recently issued an Executive Order calling for 100% carbon-free energy by 2050, with 30% of Virginia’s electric power coming from renewable energy sources by 2030. Shortly thereafter, Virginia AEE released a study that showed the economic benefits – in bill savings, jobs, and economic growth – of meeting the 100% clean energy goal by 2050, if not before. There’s much work to be done, but the path to an advanced energy future for Virginia is clear.