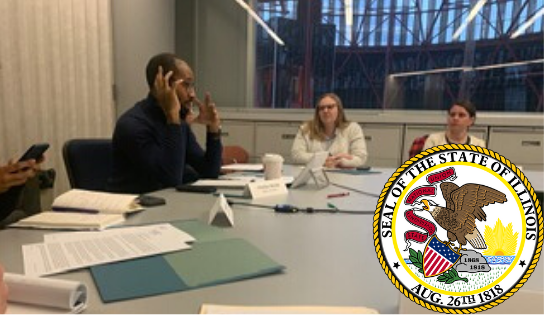 After a landmark first year in office that included passing legislation on pension reform and recreational cannabis as well as putting a new state income tax proposal on the ballot this November, Illinois Gov. JB Pritzker seemingly tackled every major item from his 2018 campaign agenda, with the exception of passing comprehensive energy legislation. But maybe not for long. In his State of the State address on Wed., Gov. Pritzker said, “Our spring agenda must address the pressing issue of adopting new clean energy legislation that reduces carbon pollution, promotes renewable energy, and accelerates electrification of our transportation sector.” In adding that he would not “sign an energy bill written by the utility companies,” he was also giving a sign of the potential for broad stakeholder input – and AEE is already ahead of the game.

END_OF_DOCUMENT_TOKEN_TO_BE_REPLACED

As part of our effort to engage candidates for governor in nine states this year on the economic opportunity provided by advanced energy, Advanced Energy Economy released a policy roadmap for Illinois on April 19 and delivered that roadmap to the major party nominees, Republican incumbent Gov. Bruce Rauner and Democrat J.B. Pritzker. Outlining a range of executive, legislative, and regulatory actions that the next governor can take to ensure continued growth of the state’s advanced energy sector, this roadmap shows the way to capitalize on the policy and business foundation already in place in Illinois and build on it, for the benefit of customers and the Illinois economy. Plus, an advertising campaign and website will provide a way for Illinoisans to learn about advanced energy – and sign up as Advanced Energy Voters!

END_OF_DOCUMENT_TOKEN_TO_BE_REPLACED

In the final days of Maryland’s legislative session, a bill to extend the state’s successful energy efficiency program – known as EmPOWER Maryland – through 2023 became law. With AEE and other efficiency advocates persuading Gov. Hogan not to veto the bill, which had passed the legislature with veto-proof majorities in both houses, the law took effect without his signature, but also with no need for an override vote. The result: an estimated $1.6 billion market opportunity for energy efficiency companies across Maryland unleashed over the next six years.

END_OF_DOCUMENT_TOKEN_TO_BE_REPLACED

Pennsylvania’s landmark energy efficiency law – known as Act 129 – continues to deliver huge electricity savings for the Commonwealth’s residents and businesses. In its most recent report on Act 129, the Public Utility Commission’s (PUC) Statewide Evaluator found that residential, commercial, and industrial consumers saved $2.2 billion in the last three years alone. So why the repeated – and so far failed – attempts to jam through legislation that would cripple the Keystone State’s energy efficiency efforts?

END_OF_DOCUMENT_TOKEN_TO_BE_REPLACED

With Bills Passed by Senate, Michigan is One Step Closer to an Advanced Energy Future After nearly two full years debating its energy future, on Nov. 10, the Michigan Senate decisively voted in favor of Senate Bills 437 and 438, energy legislation that requires utilities to produce 15% of their electricity from renewable sources by 2021. Approved with strong bipartisan support, Michigan’s new renewable portfolio standard (RPS) will replace the state’s existing requirement of 10%, which was reached by 2015, as required. Retaining and expanding the state’s RPS, which will now be coupled with a utility Integrated Resource Planning process, is a major victory for Michigan’s advanced energy industry, given that earlier versions of the bills would have eliminated the state’s RPS altogether. Same with the state’s Energy Optimization Standard, which also had been on the chopping block but now will be preserved, under a new name.