As President Calls for a “Smarter Tax Policy,” AEE Keeps Up Drumbeat for Tax Extenders 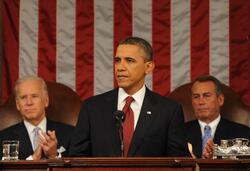 In his State of the Union Address on Tuesday, President Barack Obama said, “the all-of-the-above energy strategy I announced a few years ago is working” and asked Congress to “continue that progress with a smarter tax policy.” Meanwhile, AEE delivered a letter signed by 60 advanced energy business leaders from across the country calling for Congress to extend critical tax credits that expired January 1.

In his annual speech to Congress and the nation, Obama said, “today, America is closer to energy independence than we’ve been in decades.” He applauded the increased use of natural gas, and pledged permitting help for new factories that rely on the fuel. He also called on Congress to “help by putting people to work building fueling stations that shift more cars and trucks from foreign oil to American natural gas.”

“It’s not just oil and natural gas production that’s booming; we’re becoming a global leader in solar too,” Obama continued. “Every four minutes another American home or business goes solar, every panel pounded into place by a worker whose job can’t be outsourced. Let’s continue that progress with a smarter tax policy that stops giving $4 billion a year to fossil fuel industries that don’t need it so we can invest more in fuels of the future that do.”

The President’s speech resonated with the themes of an op-ed by AEE CEO Graham Richard published last week by The Hill. In that piece, Richard called on the United States to cash in on its increasing energy independence with “policies to promote wind, hydro, solar, and geothermal, as well as EVs, energy storage, microgrids, and energy management.” With policies that support entrepreneurs focused on making “energy systems better and smarter,” he wrote, “a future president may just announce at a State of the Union that the United States is the world’s biggest exporter of energy.”

In his State of the Union, President Obama also noted the Environmental Protection Agency’s “work with states, utilities, and others to set new standards on the amount of carbon pollution our power plants are allowed to dump in the air.” The agency’s proposed New Source Performance Standards (NSPS) for greenhouse gas emissions from new power plants were recently published in the Federal Register and comments are due by March 10th with a public hearing on February 6th. EPA’s greenhouse gas regulations for new and existing power plants could increase opportunities for both supply- and demand-side advanced energy technologies to the tune of hundreds of billions of dollars, depending on the ultimate regulatory design.

AEE’s friends at the Center for a New Energy Economy (CNEE) released a report offering 200 recommendations of executive actions that the Obama administration can take toward clean energy progress. CNEE Director and Former Colorado Governor Bill Ritter, an AEE Fellow and board member of the AEE Institute, was joined for the release of the report by Heather Zichal, who recently left her role as President Obama’s top energy and climate advisor. Zichal noted that one option includes expanding clean energy financing by requesting the IRS to rule on using Real Estate Investment Trusts (REITs) for clean energy and to determine whether it has authority to qualify clean energy for Master Limited Partnerships (MLPs) in the tax code. The report, “Powering Forward,” can be downloaded from CNEE’s website.

While there is a lot of room for progress through executive action, Congress must also act to ensure the United States leads in the race to develop advanced energy. As reported in Politico’s Morning Energy, 60 advanced energy business leaders signed a letter circulated by AEE and our state partner coalition.  The letter notes that while we’re committed to working toward comprehensive tax reform that provides investment certainty for businesses and focuses support on technologies making our energy system more secure, clean, and affordable, Congress must extend the current credits until a new tax paradigm can be phased in.

Senate Finance Chairman Max Baucus (D-MT) had his confirmation hearing for the ambassadorship to China before the Senate Foreign Relations Committee on Tuesday. His nomination could be sent to the Senate floor for confirmation as early as next week. One of Baucus’s last actions as Chairman of Finance was to release a staff discussion draft on energy tax reform last December. AEE has been developing comments with our members and will submit them before the deadline this Friday, January 31. Even with the departure of Chairman Baucus, the draft is expected to be an important part of tax reform conversations that will continue after the passing of the gavel, presumably to the current chairman of Environment and Natural Resources, Sen. Ron Wyden (D-OR).

The importance of stable policies at the state and federal level was reflected in The Solar Foundation’s National Solar Jobs Census released Tuesday. The report found that solar power deployment outpaced every energy source besides natural gas in 2013 and added over 23,000 jobs. According to the report, solar employers “felt that state-level policies such as renewable portfolio standards and authorization of third-party system ownership, as well as federal consumer tax incentives for solar investment, to be two of the top three drivers of industry and employment growth.”

Get the latest policy and industry news delivered directly to your inbox every week. Click below to susbscribe.