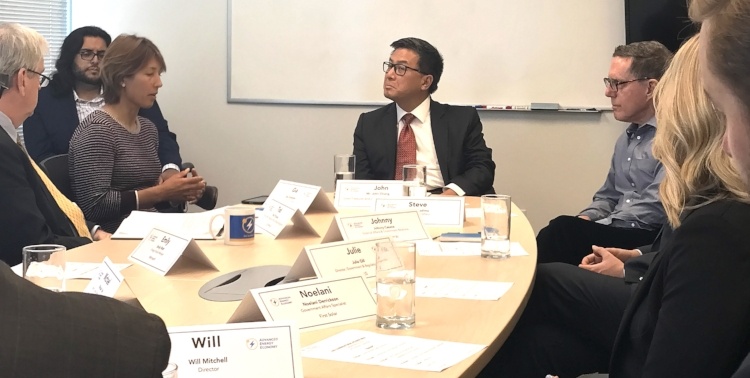 On Sept. 22, AEE hosted a California Gubernatorial Roundtable featuring Treasurer John Chiang. Treasurer Chiang joined AEE staff and our member companies for a lively session focused on the state’s leadership in advanced energy and how the industry is expanding economic development opportunity throughout the state. The roundtable was the first in a series of meetings with all the leading candidates for governor over the next few months. Through these roundtables, we hope to learn more about the candidates’ visions for the state, and we hope they will learn more about the advanced energy industry growing in California.This first roundtable covered a host of topics, including the state’s landmark climate and energy goals, advanced transportation, and the rapidly changing electricity system. Treasurer Chiang shared his vision for California and talked about his support for the state’s longstanding clean energy goals and his interest in growing the green bond market to expand investment in critical infrastrcture and emission reducing projects throughout the state.

It was a good start for AEE’s engagement with candidates for governor, heading toward next year’s election in California. AEE is already deeply engaged with gubernatorial candidates in Virginia, where the election for that open seat is next month. There, with early meetings and a policy memo delivered to the two campaigns by AEE, both the Republican nominee – Ed Gillespie – and Democratic nominee – Lt. Gov. Ralph Northam – have announced policies to grow the advanced energy industry.

AEE is planning similar efforts in other states where we are active in the much bigger election year of 2018. Stay tuned!