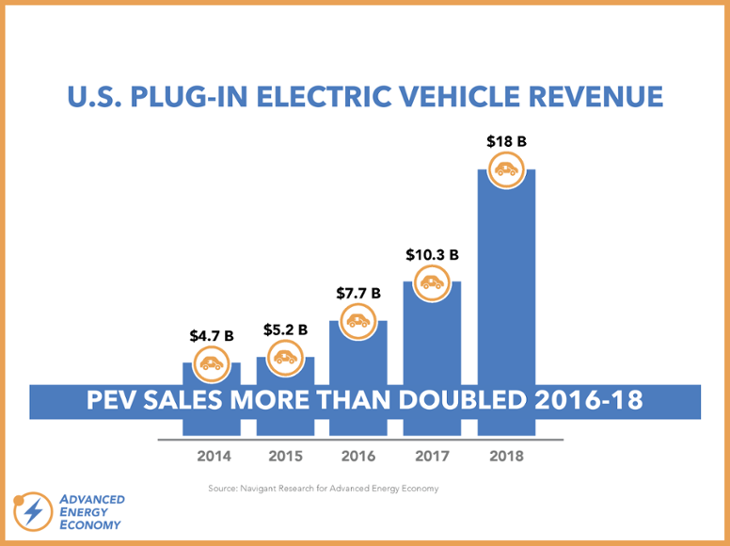 Advanced Transportation was the largest advanced energy segment worldwide in 2018 for the second year in a row, with an estimated $494.8 billion in revenue, up 2% from 2017 and 8% the year before. Since 2011, the Compound Annual Growth Rate (CAGR) of Advanced Transportation globally was 6%. At the end of 2018, over 5 million plug-in electric vehicles (PEVs) were on the roads worldwide. PEV sales are poised to enter a period of strong growth, driven by lower battery prices, maturing plug-in hybrid and all-electric powertrain systems, and a proliferation of new models. By the end of 2027, Navigant Research expects there to be 10 times as many PEVs on the road. In the United States, PEV sales are surging as well, with overall Advanced Transportation revenue growing 34% year over year and accounting for nearly one-third of U.S. advanced energy revenue growth in 2018. Since 2011, U.S. Advanced Transportation revenue has grown at a compound annual rate of 15%.

Globally, Clean Diesel vehicles, both passenger cars and trucks of all sizes, still make up the bulk of the Advanced Transportation market, despite well-publicized issues (see below), though evidence suggests that a massive shift toward PEVs is under way. At $262 billion, Clean Diesel revenue accounted for well over half of Advanced Transportation revenue worldwide in 2018, despite dropping 12% from 2017. Hybrid electric vehicles continue to grow globally, with revenue from hybrid sales up 8%, to $70 billion. But the growth story in Advanced Transportation is in PEVs, with revenue growing 49% globally, to $78 billion, and 75%, to $18 billion, in the United States.

Light duty PEV sales experienced another record year, with over 2 million vehicles sold worldwide, including 360,000 in the United States. As of June 2018, over 40 models of battery electric vehicles (BEVs) and plug-in hybrids (PHEVs) were on the market, with many more on the horizon in the coming years. Technology advances in battery packs continue to reduce the purchase price, making more affordable PEVs, such as Tesla Model 3, Chevrolet Bolt, and Nissan Leaf, a reality.

By 2021, over 25 new BEV and PHEV crossover and SUV models are planned to be sent into production. Several, such as the Acura RDX and the Ford Escape, are existing models that will receive a BEV or PHEV model addition. Others, such as the BMW iNEXT, will be newly designed models. Tesla has stated it will add an all-electric pickup truck to its line-up of vehicles, although no release date has been announced. EV truck start-up Rivian has announced its first products and Ford has announced that it will electrify its best-selling vehicle, the F-150. Deployment of charging stations is the key element of the PEV market other than vehicles, and there the United States is playing catch-up. (See Electricity Delivery and Management for coverage of Charging Infrastructure.)

In the United States, PEV sales increased 32% between 2016 and 2017 and then leapt by 75% between 2017 and 2018, reaching $18 billion in revenue. Over this time, PEV sales eclipsed those of hybrid electric vehicles, as revenue from hybrids has settled around $9 billion annually, following a decline from its $15 billion peak in 2013. PEV penetration has typically clustered around urban areas in states with incentives, though a shift may be coming as the number of models available in showrooms around the countries increases substantially. Many U.S. states with ZEV policies, such as California and New York, continue to boast the highest sales numbers, but states like Florida and Colorado are coming to the fore in PEVs. Indeed, Colorado now has an executive order requiring adoption of ZEVs, though not yet implemented.

Electric Fleets on the Rise

PEVs for use in fleets are also on the rise in specific applications. Growth is currently concentrated in China, OECD Asia Pacific nations (Australia, Japan, South Korea, and New Zealand), North America, and Europe.

In China, fleets of taxis and buses (largely state-owned) are electrifying rapidly; two-thirds of new buses in 2017 were PEVs. According to Navigant Research analysis, electric buses (including hybrid, battery electric, plug-in hybrid, and fuel cell) have already reached 16% of sales for public transit systems in the United States, as of late 2018. Fleet operators are more sensitive to vehicle economics than are individual consumers, but they are also more focused than consumers on total cost of ownership, which is more favorable for PEVs. Fleets can utilize company-owned charging depots, reducing reliance on publicly available charging stations. Over time, pairing vehicle grid integration (VGI) infrastructure technologies with fleet-owned PEVs will increase PEV payback. Companies such as UPS, FedEx, and Penske, are already actively exploring PEVs for fleet purposes.

Navigant Research estimates that PEVs made up less than 1% of the fleet vehicle market in 2018 but will rise to 12% of fleet vehicles by 2030. The light duty segment will continue to make up the majority of PEV fleet sales, but medium- and heavy-duty PEV adoption rates are expected to increase throughout the forecast period.

A key consideration for various PEV vehicle types is to determine which type of battery should be used in the powertrain. Early PEVs utilized sealed lead-acid (SLA) and nickel-metal hydride batteries almost exclusively, but now lithium ion (Li-ion) dominates the market because of superior energy density and rapidly falling costs.

The cost of Li-ion batteries has plunged from roughly $1,000/kWh in 2010 to between $270 and $200 in 2018. By the end of 2027, battery prices should be at levels where BEVs with ranges above 150 miles will be at cost parity with their internal combustion engine-powered counterparts. The cost decline will primarily be a function of leaps in battery innovation, particularly the commercialization of next generation technologies that will not only improve battery energy density but also durability.

The three emerging battery chemistries that have the greatest potential to penetrate the light duty EV market within the next five to seven years are Lithium Sulfur (Li-S), Lithium Solid-State (Li-SS), and Metal-air batteries.

Li-S batteries have long been promised as a successor to Li-ion batteries, thanks to their much higher potential energy density and the low cost of sulfur, which is the largest raw material input. However, only a few mass-manufactured, non-coin, cylindrical cell Li-S batteries are available today. These early-stage batteries have been developed for niche applications in the aviation or aerospace sectors where cycle life is not critical, but energy density and light weight is paramount These batteries typically are not capable of lasting more than 100 cycles.

Metal-air batteries use a metal anode, ambient air (oxygen) as the cathode, and a liquid electrolyte. Common metal-air cells include lithium-air (Li-air), sodium-air, magnesium-air, and zinc-air. Li-air has been touted as one of the most promising chemistries because of its theoretical energy density (over 3,400 Wh/kg). Key improvements that must be addressed is the tendency of the cell to form an irreversible solid electrolyte interphase film, severe dendrite formation, and material stability of the cathode.

Wireless Charging on the Horizon

Large investments are being made in wireless technology to make EV charging faster and more convenient. While the concept of wireless power transmission was first contemplated by Nikola Tesla more than a century ago, it is not until recently that advances in technology have made it practical. Nokia was one of the first to offer a mobile phone handset with wireless charging in 2012. Meanwhile, wireless charging for vehicles has been under development since before the launch of the first Nissan Leaf in 2010. After a short struggle to develop proprietary technology, the key players have been collaborating to develop industry standards, resulting in the SAE publication of a series of specifications in 2017. The first production vehicles with a wireless charging option came to market in 2018, with more on the way in 2019.

Nearly four years after the revelation of diesel emissions “defeat devices,” governments around the world have maintained a steady stream of inquiries into diesel automaker environmental compliance. Several major cities, including Paris and London, have considered banning diesel engines. Concerns about diesel emissions and threats to ban diesel from many urban areas are projected to cause a plateauing of volumes in the early 2020s as manufacturers shift to more efficient gasoline engines and ramp up new PEV models.

Though the global market is turning away from clean diesel for passenger vehicles, in favor of PEVs, manufacturers still see diesel technology as a path to meeting efficiency targets in certain segments, particularly utility vehicles and pickup trucks. Indeed, growth in the U.S. light commercial and pick-up truck segments offset losses from German automakers who largely abandoned the U.S. market in 2017.

In 2017, GM and Mazda launched new light-duty diesels trucks and in 2018 Ford added a diesel version of its best-selling vehicle, the F-150 pickup, en route to an announced electric model.