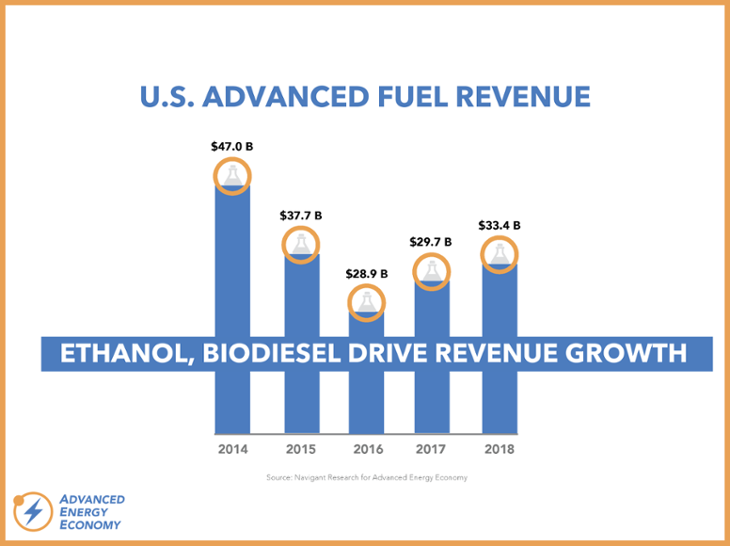 Revenue from Advanced Fuel Production grew to $160 billion worldwide in 2018, an increase of 11%, after bouncing back in 2017 from down years in 2015 and 2016. In the United States, Advanced Fuel revenue staged an even bigger comeback, reaching $33.4 billion in 2018 on 12% growth year over year. In the United States, that growth was led by Ethanol, which had declined sharply in revenue in previous years, and Biodiesel, while globally CNG and LNG used for transportation accounted for the biggest revenue gains over the past two years. The Compound Annual Growth Rate (CAGR) for global Advanced Fuel Production revenue over the 2011-2018 period was 5%, while in the United States compound annual growth was -4%.

Globally, CNG/LNG revenue grew 6% in 2018 after a 27% jump in 2017, now claiming the biggest share of the Advanced Fuel market since 2015. Biodiesel grew by 27%, reaching its highest level of revenue since we began tracking in 2011. (Table 10) Like CNG/LNG, Ethanol and Butanol fuels had a big year in 2017, registering 17% revenue growth, followed by 7% growth in 2018. Synthetic Diesel and Gasoline and Bio-oil fuels saw the sharpest annual increases in Advanced Fuel Production, both at 39%, though on relatively small bases.

Though still less than 4% of the Advanced Fuels market, Bio-methane grew by 7% globally as landfill gas continues to be captured and is increasingly consumed by waste hauling trucks. Bio-methane for use in transportation is especially growing in the European Union, where efforts to meet the Paris Agreement on climate are prompting investment. According to a study produced by Navigant for the Gas for Climate Consortium, up to 5 billion cubic meters of renewable gas could be sustainably produced in the EU for the transportation sector, which is equal to about 1% of total gas consumption.

In the United States, revenue from Advanced Fuel Production increased 12% overall, its second year of growth following two years of sharp decline. Biodiesel revenue rose sharply (43%) in 2018, buoyed by the $1 per gallon biodiesel tax credit retroactively extended for 2017 by Congress in February 2018, with revenue realized in 2018. Biodiesel production was up 16% in 2018, possibly with the expectation that the tax credit will be renewed again. The average retail price of biodiesel increased by 11% in 2018, which also contributed to the higher overall revenue.

Also, in January and April 2018, the U.S. Commerce Department imposed antidumping and countervailing duty orders on biodiesel after finding “that an industry in the United States is materially injured by reason of imports of biodiesel from Argentina and Indonesia.” However, in November, the government said that it was undertaking a “changed circumstances review” of the duty orders, which could undo the prior actions and impact the price and sales of U.S.-produced biodiesel going forward.

Ethanol and Butanol revenue grew by 11%, to $22.4 billion, comprising the largest share of the U.S. Advanced Fuel Production market. Declining revenue from Ethanol had been a drag on this segment as a whole in 2015 and 2016. Since then, the price steadied, and in 2018 posted a slight increase, contributing to the upturn last year.

Market growth outpaced the production requirements mandated by the EPA’s Renewable Fuels Standards, which had a smaller target for cellulosic ethanol, and essentially flat targets for advanced and renewable biofuels.

Though only domestic consumption is counted in the U.S. revenue, exports reached a record 1.7 billion gallons in 2018. Nearly 11% of U.S. ethanol was exported, with total exports exceeding 2017 levels by 25%. Significant blending mandates in India, Australia, China, and Philippines helped drive demand for ethanol globally.

Despite growing globally, CNG/LNG revenue fell by 6% in the United States last year after 30% growth in 2017. At just $1.6 billion in 2018, this fuel commands a much smaller share of the U.S. Advanced Fuels market than it does globally, as it is currently used primarily in transit buses and waste-hauling trucks. Synthetic Diesel and Gasoline revenue also fell by 27%, to $1.7 billion, in 2018. But Bio-methane revenue grew 11% over 2017. Since 2011, the U.S. market for this fuel from landfills and anaerobic digesters has grown at a compound annual rate of 78%, by far the fastest growth of any Advanced Fuel subsegment over this period.

In many places around the world, truck fleets are moving to LNG as a way to reduce costs and emissions, accounting in part for the strong growth of CNG/LNG fuel worldwide (though less in the United States). Scania of Sweden has delivered LNG trucks to Italy, Argentina, and Spain. The company has also introduced natural gas buses in the UK. Also adding to the demand for LNG in road transport are Volvo trucks, which are being sold in Ireland, Switzerland and the UK.

Ports are increasingly leveraging LNG fuel depots for both seafaring vessels and local trucks. For example, at the Wilhelmshaven Floating Storage and Regasification Unit in Germany, the LNG terminal will be expanded to include infrastructure to accommodate ships, barges, and ground transport. Similarly, pipelines will bring LNG to Port Arthur, Texas, where it will be used for both land and sea vessels. The Port of Antwerp is undertaking a similar upgrade.

Also, on the rise is the use of bio-methane, sometimes called renewable natural gas, for transportation purposes, especially in Europe. Scania, Shell, Nordsol and others have partnered on the BioLNG EuroNet initiative, which is receiving funding from the European Union. The group will launch 39 fueling stations using organic industrial waste and deploy 2,000 heavy-duty LNG trucks in six countries across Western and Northern Europe. Bio-methane is also starting to gain traction in the United States. The town of Longmont, Colorado, is converting 11 of its 16 diesel trash trucks to use renewable natural gas, and the Ports of Long Beach and Los Angeles are set to begin using bio-methane for their fleet operations.

Hydrogen fuel revenue continues to register zero worldwide, despite big plans by automakers and certain national and, in the United States, state governments to ramp up this alternative. The current price of Hydrogen fuel equates to a cost of nearly $15 per diesel gallon equivalent. However, the cost to drive per mile is much closer as fuel cell vehicles are about twice as efficient as comparable internal combustion engine (ICE) vehicles. Driving the prohibitive cost of hydrogen is the small scale of deployment as well as the technological requirements for producing, storing, and conveying hydrogen. Hydrogen refueling stations in the US are limited to (largely coastal) California, which opened its 39th hydrogen refueling station. The state has a goal of operating 100 hydrogen fueling stations by 2024.

Approximately 2,300 fuel cell passenger vehicles were sold in California in 2018, with three models available – the Toyota Mirai, Honda Clarity Fuel Cell, and the Hyundai NEXO. This brings the total number of fuel cell cars in operation to more than 5,000. In July 2018, California stated an ambitious goal of getting one million fuel cell vehicles on its roads by 2030. The government of South Korea continues to back hydrogen as a fuel and announced its intention to build 1,200 refueling stations by 2040 and produce millions of fuel cell cars. China and Japan each have established goals to install 1,000 hydrogen refueling stations in the coming decades.

Interest in hydrogen as a fuel for large trucks and buses derives from advantages in driving range and weight when compared to battery electric vehicles. California is piloting 25 fuel cell buses with another 31 buses and shuttles in development. Toyota and PACCAR are currently testing two heavy-duty fuel cell trucks at ports in Southern California, and they are collaborating on developing another 10 vehicles. Startup truck manufacturer Nikola intends on testing its fuel cell trucks by the end of 2019, the company said it would develop up to 700 hydrogen fueling stations during the next seven years. In Switzerland, Hyundai will work with partner H2 Energy to deliver up to 1,000 fuel cell trucks by 2023. In Europe, the expansion of solar and wind production is increasing interest in using electrolysis to produce renewable hydrogen for use in transportation. As highlighted by the World Economic Forum, France, the Netherlands and Norway are moving forward with renewable hydrogen initiatives.