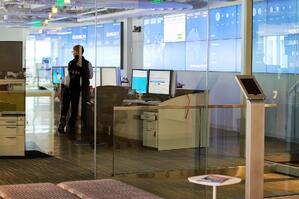 A Building Energy Management System (BEMS) is an integrated system of software, hardware and services that controls energy use through information and communication technology. Used primarily in commercial buildings, BEMS technology works by monitoring, automating, and controlling building systems such as heating, ventilation, air conditioning, thermostats, and lighting to increase building energy efficiency and improve comfort. Adoption of cloud technology has expanded BEMS from traditional energy visualization and energy analytics to include demand response and property management.[1] Campus-wide energy management systems, often called enterprise energy management systems (EEMS) are being deployed by universities, governments, and store chains. The state of Massachusetts invested in an EnerNOC EEMS system in 2010 to reduce energy costs at 470 state buildings, with an anticipated annual savings of $10 million, or 5% to 15% reduction in energy usage.

Driven by continued adoption by commercial and government customers, the global BEMS market is expected to grow from $1.8 billion in 2012 to $5.6 billion in 2020. Additionally, as utilities continue to work with increasingly stringent energy efficiency requirements, they are looking more and more toward the deployment of BEMS in buildings to reduce energy demand. Growth in the U.S. market for BEMS over the past two years was 27%, from $737.2 million in 2011 to an estimated $935.4 million in 2013.

With buildings accounting for nearly 40% of U.S. energy consumption, BEMS can lead to significant savings for property owners. Up to 30% of the energy used in the 81 billion square feet of commercial buildings in the United States is lost through inefficiencies, creating a large market for BEMS services. For instance, Cooper Realty Investments challenged Johnson Controls to increase the energy efficiency of the Bank of America Plaza building in Columbia, South Carolina. By installing a Johnson Controls Metasys building management system and implementing efficiency technology, the building’s energy usage was reduced by 15%, resulting in $43,000 per year in energy savings.

[1] Demand response (DR) is the ability to reduce load in response to price or other signals from the utility, usually to help meet peak demand.