Advanced Energy from the Ocean 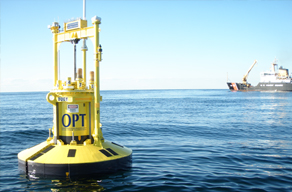 What if you could harness the power of the ocean waves to power your home? Ocean and tidal power generation has remained a largely untapped market in the United States so far, but that could be changing soon. The U.S. Department of Energy estimates that the U.S. could be sitting on up to 1,400 terawatt hours of potential electricity generation per year from wave and tidal energy.

“Wave and tidal energy represent a large, untapped resource for the United States,” said Assistant Secretary for Energy Efficiency and Renewable Energy David Danielson. “[Developing it] is an important part of our all-of-the-above energy strategy.”

To that end, the DOE has announced it would invest $16 million to help fund 17 projects to capture tidal and wave energy. The money is split into two buckets: $13.5 million will fund projects to build and improve the devices for capturing tidal energy. Companies like ABB and Ocean Energy USA will develop and improve devices, drivetrains, and generators. The remaining $2.4 million will help fund data gathering and analysis projects that can predict potential electricity generation and potential demand for tidal electricity in coastal cities. Learn more about each project here.

One wave energy project already underway in Oregon, however, has encountered some obstacles. Ocean Power Technologies set out last September to build America’s “first wave-powered utility.” Now, nearly a year later, the project has been put on hold due to regulatory and technical difficulties. “It’s tough fighting with a new technology,” said Kevin Watkins, Ocean Power Technologies’s Oregon representative. State and federal agencies are “scrambling” to write policies for marine energy, and coastal communities are dubious about the environmental impact the buoys may have.

Does that sound familiar? American offshore wind has grappled with those very same issues for years. There is some movement on that front, however: the Department of the Interior held its second auction of land for offshore wind development this week. The auctioned land sits off the coast of Virginia and sold for $1.6 million to Virginia Electric and Power Co., a subsidiary of Dominion Virginia Power. Perhaps America will be able to turn to her coastline for energy, one way or another.

In other news this week, the United States added 976 megawatts of solar PV capacity in Q2 2013, according to a new report out this week. A record-breaking 521 MW was installed in California alone, with more on the way: SunEdison just announced new funding to the tune of $67.3 million for new projects in California. The new installations bring 2013’s total new PV capacity to 1764 MW. The Department of Energy awarded $45 million in grants for vehicle research to improve fuel efficiency and lower transportation costs. And Orlando is looking to incorporate electric vehicles into their bustling tourism industry: you can rent an electric car at the airport and charge it at tourist hotels, theme parks, and other destinations across the city. EVs are going to Disney World!